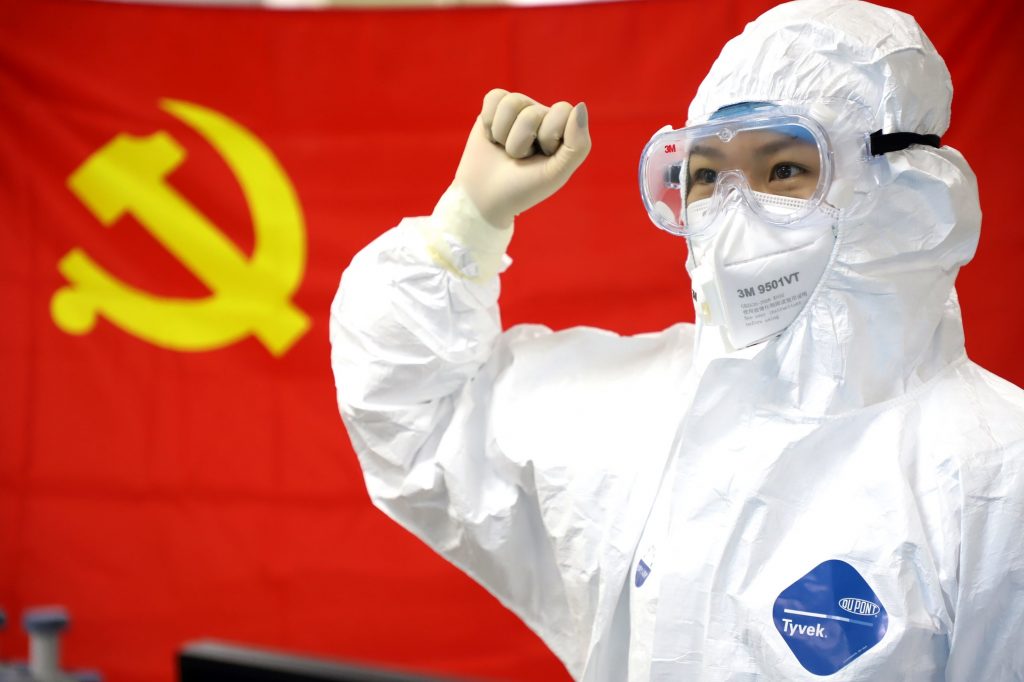 “China can raise up to 100 million military troops over time, flooding CONUS with a seemingly endless stream of combat troops.”

This is a reminder of how CCP fought the Korean War, Vietnam War and practically all other wars before P.R.C. was set up in 1949.

Nation-wide lockdowns are meant to put tens of millions of people out of jobs, so these penniless souls can be easily mobilized as perfect suicide attackers to do the unthinkable for evil CCP. Lockdowns also keep famers away from their fields in the spring.
Man-made food crisis in China will be used to control its hungry civilians to serve as human shields/cannon fodder/hostages for military attacks or invasions to come. CCP regime has been putting poisonous ideologies of xenophobia and revenge to kids of all generations for the past 70 years.
—
Xi and his confidants have had many reviews regarding the on-going Ukraine war and their conclusion of Russia not winning as expected was not making preemptive strikes of nuclear and biochemical weapons in the early stages, according to the whistleblowers.
The almost one-hour long recording is quite impossible to forge. All the members in the meeting are recognized with names and titles. They are all VIPs with voiceprints to compare with.
https://www.youtube.com/watch?v=FHZ-49Qhdl4
This is the link to the latest English translation of the Guangdong meeting. I can feel that they/Lude media put a lot of effort into this. Still work in progress but please refer~

https://axisact.gitbook.io/lude/war_mobilization_meeting“It’s from a group of senior members of the Chinese Communist Party military who risked their own lives to expose the evil plan of Xi Jinping and the CCP to the civilized world.The meeting was held on May 14, 2022 Beijing time, and was first published on May 14, 2022 New York time, by Lude Media…”

In this page (https://axisact.gitbook.io/lude/war_mobilization_meeting/translation_part_i), “保障战略决胜” (guarantee the strategic final victory) means to launch the intercontinental ballistic missiles with nuclear warheads, i.e. 东风41核导 to the continental United States, according to

https://www.youtube.com/watch?v=Np53QtfNS1o
This is the link to the latest English translation of the Guangdong meeting. I can feel that they/Lude media put a lot of effort into this. Please refer~

“It’s from a group of senior members of the Chinese Communist Party military who risked their own lives to expose the evil plan of Xi Jinping and the CCP to the civilized world.

There is still hope to bring down CCP from the inside. Xi JinPing’s “The People’s War” is practically national terrorism. Millions of people will be forced or tricked to do suicide attacks and die for nothing. According to what I’ve heard from Lude’s shows, more and more middle to high ranking officials have woken up. Xi wants to be an emperor. Everybody else is just a dispensable tool for him.

If more inner-circle Chinese are brave enough to take actions, CCP’s controlling mechanism is actually very fragile to demolish from the inside. But CCP’s evil ideologies, and its pyramid power structure have to be destroyed completely, not to replace Xi with another devil.

Japan has proposed the possibilities regarding conducting a beheading blitz on Xi. It’s the best way. China is a totalitarian country. If the head of the dragon is being cut off, the dragon dies immediately. CCP China plans to push Japan down to hell as well.

Does Albanese speak Chinese? A native Chinese Mainlander, my friend, wants to offer her two cents.

“Major platform Tencent News is running a piece claiming that Albanese speaks Chinese … And that will make him better for dealing with China…”
https://twitter.com/billbirtles/status/1528263512165715968

This remark is an implicit, subtle way for a major Chinese (state-run) media platform to proclaim to the world that – Albanese is Penny Wong. Albanese is just a front. Penny Wong is behind everything. So Albanese does speak Chinese. 中南海 (CCP headquarters in the Imperial City, Beijing) is celebrating.

CCP also published another article mocking Morrison pointing out his biggest fault was “dare to ask about the origin of the virus”. So we’ve got another virus tied to the infamous Wuhan Lab – Monkeypox in 2022. Hundreds of deadly viruses in CCP biolabs.

if another Solomon’s-style security pact is signed in Kiribati or elsewhere, don’t be surprised.
https://twitter.com/billbirtles/status/1528896487748296704

Because of the leak which caused “1 lieutenant-general & 3 major generals executed, many others arrested…”, the timetable of attack has been brought forward from October/November to August, for now. Xi JinPing is really crazy.
China preparing for “D-Day” INVASION of the continental United States, with forces to land on the beaches of California, as Biden and Newsom serve as China’s accompliceshttps://www.naturalnews.com/2022-05-20-china-preparing-for-d-day-invasion-of-the-continental-united-states.html#
https://www.brighteon.com/9fe9eae5-22a2-4f72-a376-eca4bede6c06
America Out Loud Newshttps://twitter.com/GetLoudAmerica/status/1528176630694281216The leak caused “1 lieutenant-general & 3 major generals have been executed, many others arrested…”
https://twitter.com/jenniferatntd/status/1528100158063403008https://twitter.com/jenniferatntd/status/1528212854620528642

This NewsMax article is much more understandable than the one on the Gateway Pundit. Please see:
https://www.newsmax.com/claremlopez/china-war-russia-taiwan/2022/05/20/id/1070707/

The recording includes many specific terminologies developed and used by CCP PLA exclusively. Lude media are composed of CCP renegades. Many of them were involved with CCP military or intelligence sections before defecting to freedom.

They have just decoded very important information. The Ukraine War is a distraction to deplete US arsenals in advance. CCP plans to attack US with nuclear bombs, 东风41核导.

p.s. China has 34 provincial-level administrative regions. Guangdong province alone is recruiting 150,000 civilians for war, on top of millions of the regular army of CCP PLA. (merely one province, Guangdong, needs to submit 64 10,000-ton ships, 38 aircrafts, 588 train carriages, and civil facilities such as airports and houses… and countless drones to the state…)

CCP will use all these shocking amount of “military-civilian joint mobilizations” as Kamikaze attacks to deplete US’s arsenals and logistics resources, as well as diversions before it launches the intercontinental ballistic missiles with nuclear warheads, i.e. 东风41核导 to the United States.

CCP’s ballistic missile is already capable of striking North America, and it is still grabbing islands for future launching bases.
Chinas-Kiribati Developments Worry Australia, Hawaii and The United States
https://www.silkroadbriefing.com/news/2021/06/09/chinas-kiribati-developments-worry-australia-hawaii-and-the-united-states/Australia Nz Warn Solomons over Destabilizing the Pacific with China deal
https://www.smh.com.au/world/asia/australia-nz-warn-solomons-over-destabilising-the-pacific-with-china-deal-20220325-p5a7xn.html
Xi JinPing is stocked with the result of the Australian election. Senator Penny Wong, of mixed Chinese heritage and the next Foreign Minister, is a third-generation CCP insider according to the evidence shown in the latest Lude episode.