Just a word to let you know the BioAPI’s applications to Pilot-To-Vessel programs seem to have been having many problems recently. This very same problem exist in the Tier 3 (TR3B triangular crafts) Class Vessels, but is not publicized as it is Unacknowledged…

Fort Worth Star-Telegram| by Bob Cox

Problems that have imperiled pilots of the famed F-22 Raptor fighter jet are being fixed, a senior Air Force leader said this month.

Not everyone, however, is reassured.

Tinsley, who was 45, commanded Elmendorf Air Force Base in Anchorage, Alaska, and was still flying F-22s when he shot himself in the chest one afternoon in an uncharacteristic outburst of rage.

In a lengthy interview with the Star-Telegram, Joanna Tinsley said her husband experienced big changes during the last few months of his life. He was normally a happy, highly energetic and caring man, but he deteriorated physically and emotionally.

“He was short-tempered. He was impatient. He would get mad at things that never would have agitated him before,” said Tinsley, who now lives in Phoenix.

“He was more foggy-headed. He would ask questions over and over again and then stare at you with a blank look.”

Tinsley suffered headaches, his appetite diminished, and he had trouble sleeping. He was plagued by a chronic cough, a common problem for F-22 pilots.

Now, after reading reports of strange occurrences involving other F-22 pilots and comparing notes with other wives, Tinsley said she can’t help but believe that the Air Force’s prized fighter is a health risk. Something about the F-22, she theorizes, may have triggered her husband’s suicide.

“They’re seeing the same things, the same changes that I saw in Tom,” Tinsley said.

Tinsley, another wife and two former engineers who worked on the plane’s development are among those who believe that something still isn’t right with the F-22, which was partially built at Lockheed Martin’s Fort Worth plant.

Reassuring statements aside, they said, the fighter’s problems haven’t been fixed and are worse than the Air Force lets on.

Numerous reports over the past four-plus years described F-22 pilots as becoming disoriented, even blacking out in flight. A lingering cough and respiratory problems were commonly reported, as well as neurological and emotional problems. Two pilots were killed in F-22 crashes.

Amid growing evidence of issues not seen in earlier fighter jets, and facing congressional pressures, the Air Force launched an investigation in 2011. The planes were grounded for several months.

Air Force accident investigators found that the pilot in one crash apparently became disoriented and was unaware of impending danger until it was too late. In another case, the aircraft’s air-supply system failed and the pilot did not or could not activate his emergency oxygen supply, became disoriented and made no attempt to right his plane for 31 seconds before crashing into frozen Alaskan soil.

Other pilots have landed safely but with no memory of doing so. One flew through treetops on approach and apparently didn’t know it. 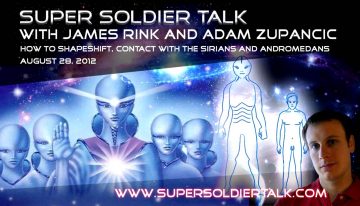 In this video James Rink places Adam Zupancic in hypnotic regression in which he explores ways to shape shift. He also makes telepathic contact with the Sirians and the Andromedans to assist us with healing from milabs.

A Fresh Report on Milabs

There is a coming embargo beginning in the Pacific. The cook Islands are having an emergence summit. Hillary Clinton will be there this week to try and talk the Inland nations to stay with US interest she is worried. China wants to put a war ship naval base in Fiji as well as looking at Tonga as well with preparations of a possible base there. Inroads have been taken between China and the Cook Islands work together. China has loaned some of these nations up to 700 million as well as filled the vacuum regarding being a major power for this region this does not include aid money which is millions. Japan also has an interest since Japan and China … 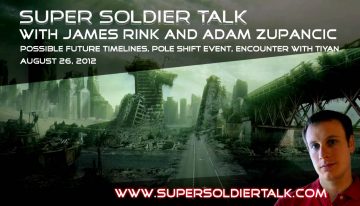 Super Soldier Talk – Poleshifts and a Encounter with Tiyan – August 26, 2012

In this video James Rink places Adam Zupancic in hypnotic regression in which he explores possible future timelines in which a pole shift occurs and another in which humanity ascends. He also makes contact with a 14’ foot tall reptilian named Tiyan who’s been hiding out in the swamps in Louisiana. Tiyan was one of the milab scientists who helped create Adam, but he became attached and when Adam was slated for termination he intervened and turned against the program by helping us.

EPOC Neuroheadset Can ‘Hack’ Into Your Brain, Researchers Say

Image of Emotiv System’s EPOC Neuroheadset Every time we turn around, it seems like there’s another social network security breach or a targeted attack on cloud-based data. We’re increasingly feeling like the last place we can keep any information safe is in our own heads — but even that may not be safe much longer. Researchers have identified a way to steal information right from our minds using a device that wraps around the skull and can read brain waves to extract data like PIN numbers and places of residence. The researchers, hailing from the University of Oxford, University of Geneva and UC Berkeley, use the “brain hacking” device to retrieve PIN numbers like this: Study participants first memorized a four-digit PIN number, then …

Recording of skull and bones initiation

A message to Milab Survivors.

From Anon. Yeaps they are mad James I have had more implant put into me so I must be doing something right and they cannot seem to control me all to well. What can we do to really piss them off I think of that every day of what I can do or what we can do and every night there is not a moment that goes by where I am not thinking of it. That is how much I hate what they do and what they are doing 24/7. I hate all the implants in me and all the upgrades that I have. I hate having my ability’s being used for evil because before they came along with the …

Stargate or Star Wars?  Darren Perks a British Ufologist writes, “Since approximately 1980, a secret space fleet code named ‘Solar Warden’ has been in operation unknown to the public… Is this nonsense, is it a conspiracy or is it simply so sensitive that it will cause uproar around the world?” These are my own words after conducting research into the secret program. Whilst conducting an FOI (freedom of information) request with the DoD (department of defense) in 2010, I had a very unexpected response by email from them which read: “About an hour ago I spoke to a NASA rep who confirmed this was their program and that it was terminated by the President. He also informed me that it was …