Post Views: 140
Shimi Bersh describes his past life recalls as a Female SSP Asset as well as participating in the Hybrid Programs in ET bodies and his various ET abduction experiences.

Did We Discover a Large Undersea Alien Base in the South-East of Puerto Rico?

Post Views: 223
The archipelago of Puerto Rico, in the Caribbean Greater Antilles, is a land full of riddles and surprises that for many decades has been a hot spot of UFO / extraterrestrial activity. This activity has been connected, in many occasions, with the sea surrounding our territory. Now, we have made a startling finding which may, perhaps, shed more light on this enigma.

We discovered them while studying the seabed around the island using NOAA images derived from that agency’s studies by means of satellite imaging and sonar bathymetry, etc. The structures are much too geometrical in shape, and that detail makes us think they are complex artificial structures, and not the product of casual natural geological formations.

The first anomalous structure consists of an extremely large rectangular structure which shows at its left end what appears to be an entrance into the seafloor. The structure and its ‘entrance’ are geometrically-shaped too, and again, they seem to be of an artificial origin.

But also, starting right out from the top left of that structure there is what seems to be huge roads or tunnels which connect to the continental shelf in the south of the city of Ponce, in southern Puerto Rico.

‘Coincidentally’, back in the late 1980s many citizens of the city of Ponce pleaded the media to ask the local and state authorities to investigate something that worried them: at night loud noises and loud buzzing sounds were being felt. It was as if someone was drilling or boring underground with some powerful machines. They also reported hearing great noises like those of large falling rocks which tumbled underground.

For several days the locals and other curious citizens from nearby towns made night vigils, but eventually the media stopped covering the issue and it was silenced. Subsequently the noises and vibrations stopped and the mystery was forgotten.

Now, after discovering the submerged roads or tunnels that connect with the continental shelf in the south of the city of Ponce, I think on the possibility that the two things are related. Did the builders of the structures on the seabed south and southeast of Puerto Rico also built an underground access to the city of Ponce? Maybe another underground facility there?
C. 2012 Jorge Martín. Read the full article Here.
https://jorgemartin-enigmasdelmilenio-english.blogspot.com/2012/08/did-we-discover-large-undersea-alien.html
In photo below: Mr. Aurelio “Yeyo ‘Rosa, fisherman
and a former security guard for the US Navy in Vieques,
had several encounters with these creatures in the US Navy bases and in the lagoons of the island-municipality. 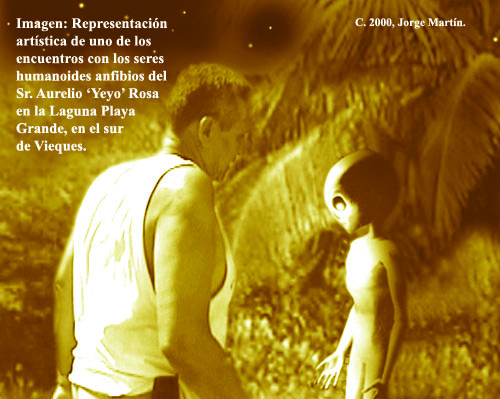 For any comments, send an e-mail to:
jorgemartin87@yahoo.com

Posted by Jorge Martín at 1:07 PM
Email ThisBlogThis!Share to TwitterShare to FacebookShare to Pinterest

The U.S. Space Force is now a very real thing.

(TMU) — This week, Air Force Gen. John “Jay” Raymond was sworn in as the chief of Space Operations for the new United States Space Force. While it was initially reported as somewhat of a joke when Donald Trump first announced it, the U.S. Space Force is a very real thing and is now the seventh military branch of the Pentagon.

On Tuesday, Raymond was sworn in by Vice President Pence at his ceremonial office.

“It is President Trump’s belief that the United States must remain as dominant in space as we are on land and sea and the air. And your charge is to see to that mission with the United States Space Force,” Pence said during the ceremony.

Raymond responded by saying, “Mr. Vice President, we have our marching orders and we are moving out. We do not want a conflict to begin or extend into space, we want to deter that conflict from happening. The best way I know how to do that is to do so from a position of strength.”

The Space Force will be comprised of roughly 16,000 officers and other personnel from the U.S. Air Force and U.S. Space Command. In fact Raymond is himself a commander of both the Air Force Space Command and the U.S. Space Command, possibly signaling that these agencies will be working very closely and consisting of many of the same members.

In addition to the personnel from other agencies the Space Force was granted $40 million through the 2020 National Defense Authorization Act (NDAA).

Trump is expected to hold a meeting with Pentagon officials this week to discuss uniform and logo details for the new agency. The meeting will include Defense Secretary Mark T. Esper, Air Force Secretary Barbara Barrett, and the new chief of Space Operations Jay Raymond.

The Trump administration is also planning on sending a legislative proposal to Congress for the fiscal year of 2021 which would create National Guard and Reserve units for the Space Force. The proposal also seeks to consolidate other space-related organizations in the government under the Space Force banner including the Space Development Agency.