A few days ago we posted an article pointing out that director Christopher Nolan’s latest Batman release “The Dark Knight Rises,” which was recently released on DVD, bizarrely featured a mention of the words “Sandy Hook” (at approximately 1:58).

Since that “minor coincidence,” we’ve scoured the Batman movies and pored over various Gotham City maps to find anything that could support the theory that the movies may have had hints of foreknowledge of the tragic massacre that occurred last week, because where there’s smoke, there’s usually fire.

What we’ve found is interesting to say the least.

We looked at different maps of Batman’s fictional home town Gotham City and compared them with each of the films.

In the latest film, the southern section of Gotham is without a doubt called “Sandy Hook,” however,according to our research, this section was renamed somewhere between the first film and the last.

Take a look at the map in this still frame found in the first Batman movie, “Batman Begins,” taken around 14:41: Although blurry, the colors match up with the map below, in which the southern section in question is called, “South Hinkley,” not “Sandy Hook”: See the below comparison: 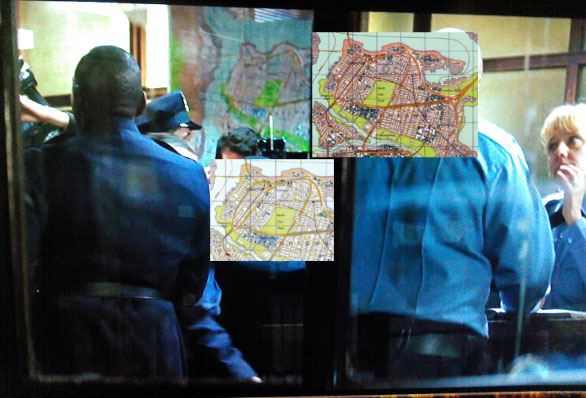 Also, the design of the map is different than ones seen in “The Dark Knight Rises:” A book titled “The Dark Knight Manual,” the “definitive guide to his tools, vehicles, and technologies,” was published, according to Amazon, on July 10, 2012 and features a map in which the section is called “South Hinkley,” not “Sandy Hook.” The book is described as “an in-world exploration of Christopher Nolan’s Batman,” and was released nearly simultaneously with the “Dark Knight Rises” movie, yet it fails to reflect the southern Gotham island as “Sandy Hook.”

Meanwhile, numerous December 2011 posts tell of promotional material being sent out by Warner Brothersin advance of the “Dark Knight Rises,” curiously with maps. The website FirstShowing.net says they received a package containing a “new Bane ‘Fire Rises’ t-shirt that comes in a tube wrapped in a map of Gotham City.” In this promotional material, vividly showing Bane’s “strike zones,” the map shows the southernmost island is titled “Sandy Hook.” A tip of the hat to the Gothamist who also informed their readers of this.

According to the website DarkKnightNews.com, director Eli Roth also received a promo kit. In a Twitter post last year, the Cabin Fever director was featured wearing the Bane t-shirt saying, “THIS just showed up at my house with no explanation or return address. Should I be worried?”.

The “No Man’s Land” Batman comic series (published March – November 1999) featured a cover with the section in question going under the label “Tri-corner Yards,” and various other, seemingly older maps show this title as well. Others argue that the name “Sandy Hook” is just a common name for towns.

For those who are left asking, “Why would someone do this?” Alfred Pennyworth, butler to Bruce Wayne, says of an evil force in “The Dark Knight” movie, “some men aren’t looking for anything logical, like money. They can’t be bought, bullied, reasoned or negotiated with. Some men just want to watch the world burn.”

Someone on another message board pointed out an interesting exchange between Commissioner Gordon and the newly promoted detective Blake in “The Dark Knight Rises”:

Blake: Sir, that could all just be a coincidence.
Commissioner Gordon: You’re a detective now, son. You’re not allowed to believe in coincidence anymore.

Now the questions become: Why did they change the name from “South Hinkley” to “Sandy Hook,” and Who authorized the change?

If you are enjoying spotting these bizarre coincidences and traveling down the road of curiosity with us, stay tuned for tomorrow’s scintillating revelation that some are saying is the “smoking gun” needed to tie the Dark Knight Rises, the Aurora massacre and the Sandy Hook tragedy. We guarantee it will leave you wondering, “Exactly WTF is going on?!”

[Update: In the map, a “South Hinkley” was renamed. Although spelled differently, this may be a referenceto John W. Hinckley, the gunman that attempted to assassinate President Ronald Reagan on March 30, 1981.]

In the week following the horrific mass shooting that left 20 children dead at an elementary school in Newtown, Connecticut, independent minded journalists and researchers have continued to search for answers to what has become one of the worst mass shootings in American history. From reports of multiples shooters, to the fact that the corporate media, in conjunction with the government, has launched a full-scale attack on the 2nd amendment in response to the shootings, the facts behind the shooting have led many to believe that this was some sort of black ops type false flag initiated and carried out with the long-term goal of disarming the American people.

Now, a startling video is making the rounds that seems to indicate that either there was some sort of media or government manipulation at a press conference for the victims families or, although less likely, actors are being used in what would be one of the most blatant false flags in recent history.

In the video, Robbie Parker, the father of slain 6-year-old Emily Parker, can be seen smiling and laughing before asking someone if he should, “read off the card.”

What is unknown at this time is what the above clip actually means although it does seem very suspicious and, at the very least, shows some sort of media manipulation.

In a report published on the Huffinton Post, the father was described as,” Fighting back tears and struggling to catch his breath,” during a the heart felt press conference.

Robbie Parker’s daughter Emilie was among the 20 children who died Friday in the one of the worst attacks on schoolchildren in U.S. history. He was one of the first parents to speak publicly about their loss.

“She was beautiful. She was blond. She was always smiling,” he said.

Parker spoke to reporters not long after police released the names and ages of the victims, a simple document that told a horrifying story of loss.

An article published along side the above clip on Infowars.com noted how odd it actually was.

As unexplained factors in the tragic Sandy Hook school shooting continue to surface, independent researchers have pointed to an odd clip where Robbie Parker, father of slain 6-year-old Emilie Parker, asks if he should read off of a card, and is told that he should, during a press conference that took place the day after Friday’s shooting.

Is the establishment media trying to steer the victims’ reactions?

As of now there is simply no way to conclusively tell what was exactly going on during the press conference and it is very possible that the corporate media was simply coaching a grieving father who was dealing with the horror of losing his child in a way many of us couldn’t begin to understand without suffering a similar lose ourselves.

With that being said, something odd definitely took place.