Death of a Super Soldier 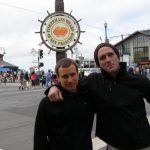 UPDATE: Stewart Swerdlow said he heard directly that “He was found dead and unresponsive at his friends in Poland.”
UPDATE: from Aleksander Berdowicz. “He was never in coma. His heart stopped and then they tried to reanimate him for a few hours. The ambulance came and went away after an hour, but 3 other people tried to continue reanimation with no success.”

I have sadly just received a text from Poland, that Max Spiers, British-American super soldier, has been found dead. He had been staying with mutual friends outside of Warsaw. He was found in his room unconscious and with no pulse. Emergency crew was unable to revive him.
Max was a friend. He was troubled and when I saw him last month in Poland, he did not seem right. I am sad to report on his passing. But, he is free of Earthly pains now. Our deepest condolences to his family. Rest in peace, Max.
https://youtu.be/pOiFNJFkWqQ?t=7m10s
http://www.expansions.com/death-of-a-super-soldier/