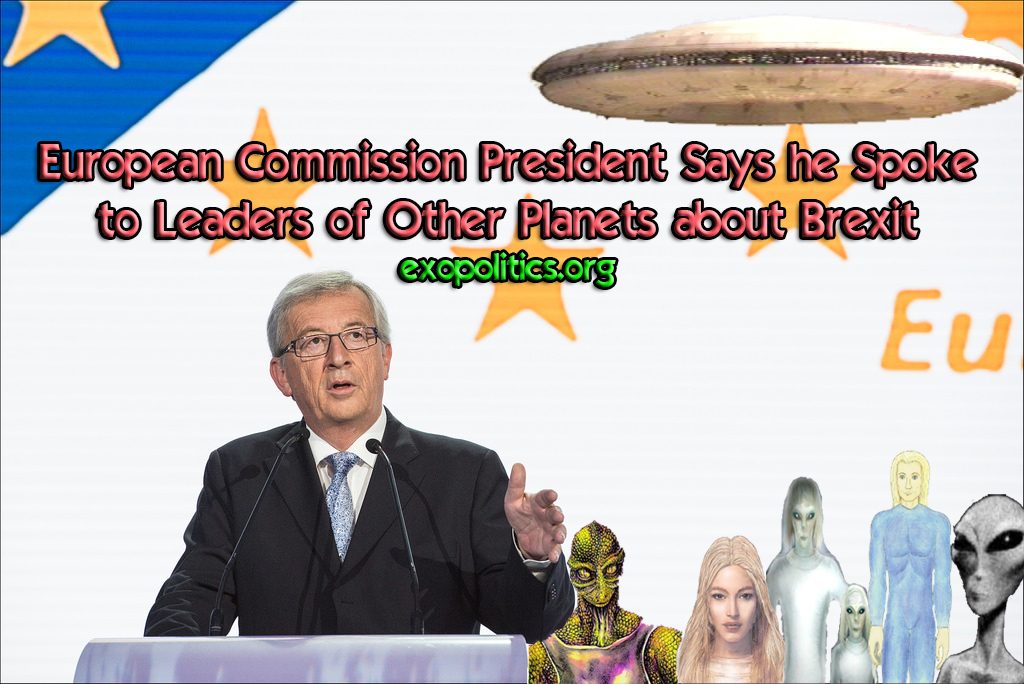 In a speech before the European Parliament discussing the consequences of the Brexit vote, the President of the European Commission, Jean-Claude Juncker, made the stunning comment that he had spoken about it to “leaders of other planets.” Juncker’s comment suggests that world leaders are in communication with extraterrestrials, which closely monitor global events and assess their geopolitical and ‘exopolitical’ impact.

Juncker’s speech was given on June 28 at an emergency meeting in Brussels by the European Parliament. Here is what he said in French along with the English translation:
“Il faut savoir que ceux qui nous observent de loin sont très inquiets. J’ai vu et entendu et écouté plusieurs des dirigeants d’autres planètes qui sont très inquiets puisqu’ils s’interrogent sur la voie que l’union européenne va poursuivre. Et donc, if faut rassurer, et les européens, et ceux qui nous observent de plus… loin.”
“It should be known that those who observe us from afar are very worried. I met and heard and listened to several of the leaders from other planets who are very concerned because they question the path the European Union will engage on. And so, a soothing is needed for both the Europeans and those who observe us from … farther away.”

[youtube https://www.youtube.com/watch?v=x9pby3pyxuE]
The official transcript released by the European Commission has been edited to remove the reference to “leaders from other planets”. The transcript now reads:
J’ai vu et entendu et écouté plusieurs des dirigeants. Ils sont très inquiets ….
“I saw and heard and listened to several executives. They are very worried …”
Yet, when one listens to an audio loop of what Junker’s actually said, he very clearly includes the phrase “dirigeants d’autres planets,” which translates as “leaders of other planets,” as pointed out by native French speakers discussing Junckers speech, and also by Google Translate.
There has been clearly an official attempt to cover up Juncker’s admission to having spoken to “leaders of other planets,” and making it appear as though he was instead referring to “executives” concerned about Brexit. So what did Juncker have in mind when he said he spoke with “leaders of other planets”?
One possible interpretation is that he meant to say that he had spoken with “other planetary leaders” outside of the European Union, and made a simple grammatical error as some contend. If so, then why wasn’t the official transcript corrected to make it clear that he had misspoken? Furthermore, it is difficult to imagine a major world leader would make such a dramatic error in an important speech to the European Parliament without realizing it immediately and correcting that error on the spot.
Also, at several points in his speech, Junckers makes references to himself as a “human being” and not a robot or a machine, suggesting that some in his intended audience are not human as one native French speaker has noted in translating and interpreting his comments in a helpful thread on the Project Avalon Forum.
Taken on face value, Juncker’s speech directly raises the issue that “leaders of other planets,” or extraterrestrials, are very concerned by the Brexit issue and its implications for the European Union. It’s worth exploring why this might be the case. There are two scenarios I wish to raise here.
One is that extraterrestrials require global unity as a precondition for revealing themselves to humanity, or having their existence disclosed. If so, then the effect of  Brexit is one of slowing down the process of global political unification, thereby delaying any official announcement of extraterrestrial life.
If the above a scenario is correct, then what becomes important is whether the extraterrestrials are acting out of positive or negative intent in making global political unity a precondition for revealing themselves.
While it appears logical that global political unity is required for any planet to be introduced to wider galactic life, as popularly depicted in many Sci Fi shows, it does not follow that having a world government is necessary for open contact to happen. Here we need to distinguish between ‘global government’ and ‘global governance’. Our planet may already have achieved sufficient ‘global governance’ in terms of interlocking international treaties and institutions, thereby making ‘global government’ a moot point.
Nevertheless, if some extraterrestrial leaders genuinely desire global political unity before revealing themselves, then while Brexit does slow this process down, it appears disingenuous for aliens to make this a precondition.
The second scenario is that the European Union is a façade for a Nazi Fourth Reich which has secretly made alliances with a group of extraterrestrials called “Draconians.” A retired aerospace engineer, William Tompkins, has provided documents supporting his claims that he participated in a covert U.S. Navy program with 29 spies in Nazi Germany who had discovered that the Third Reich had made secret agreements with Draconians.
[youtube https://www.youtube.com/watch?v=Ve3W35RjNGo]
A result of the alien agreements led to the Nazi’s coming within a whisker of winning World War II, but had nevertheless been able to relocate much of their technological infrastructure to Antarctica before the War’s end. This gave the breakaway Nazis the time they needed to achieve a decisive technological superiority over the U.S. military, as demonstrated during Operation Highjump in 1947.
Subsequently, the breakaway Nazi groups established a Fourth Reich through covert economic means, which involved both the infiltration of the U.S. Military Industrial Complex, and the creation of the European Union. In such a scenario, Brexit is a clear challenge to the Fourth Reich as I have argued elsewhere.
There are other scenarios that may help explain why “leaders of other worlds” are concerned about Brexit, and why Junckers chose the European Parliament as the forum to “leak” this information. Most EU Parliamentarians are not part of the official loop on what would clearly be highly classified discussions with advanced alien civilizations, yet Junckers chose to reveal this to them. Why?
Many will be tempted to dismiss Junckers’ admission of having spoken with extraterrestrials as him simply misspeaking about confidential discussions with other world leaders. However, the clumsy attempt by the European Commission to remove the “leaders of other worlds” reference from the official transcript of his speech, no effort to clarify his real intent in the transcript, and overall context of his speech suggest otherwise.
Junckers speech needs to be taken at face value, and therefore provides startling evidence that we are moving from a world of ‘geopolitics’ to ‘exopolitics’ requiring new levels of analysisin understanding major political events on our planet such as Brexit, and the existence of extraterrestrial life.
© Michael E. Salla, Ph.D. Copyright Notice