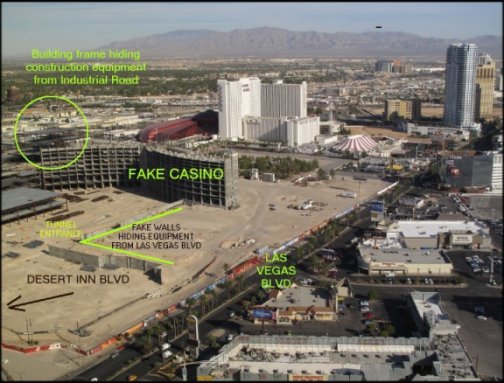 The Echelon Story by Lohn Lear

The following story comes from the warped mind of John Lear

who, at the age of 74, may be suffering from the final stages of dementia. The story is not meant to be true or accurate and please accept my apologies if any of you are offended or inconvenienced for any reason.

ECHELON WORKERS WERE TOLD THAT IF THEY EVEN LOOKED DOWN FOR A PEEK ON THE CONSTRUCTION AREA THEY WOULD BE SHOT BY CIA SHARPSHOOTERS ARMED WITH HIGH POWERED RIFLES.

THREE OF THE 4 SHOOTERS PROBABLY USED THE SUBWAY TO ESCAPE, THE FOURTH SHOOTER WAS IN THE HELICOPTER THAT WAS NEVER SEEN AGAIN.

In 2007 Boyd Gaming demolished the Stardust to develop Echelon Place, but construction was halted during the economic downturn of 2008. Boyd sold the 87 acres (35  hectares) site to the Genting Group for $350 million in March 2013.

Resorts World decided to use the construction structure of the Echelon instead of demolishing it. It was initially to break ground in 2014 and open in 2016. 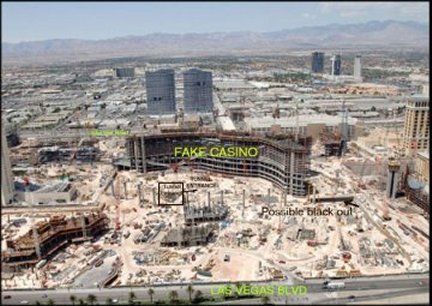 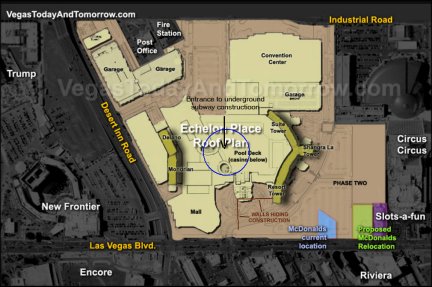 Now here is the truth:

In 1978 the shadow government started building a secret base near Silent Spring Canyon on the Paiute Mesa in the Nevada Test Site. Its name then was Sandia.

Several miles to the north on Gold Flat they built a huge new secret airbase that rivals Area 51 in size and technology. They built 2 huge runways with a hangar in the the middle of the runways so that they could test new aircraft in total secrecy. Using alternate runways so that the secret projects using the eastern half of the hangar and runway could not see the secret projects using the western part of the hangar and western runway.

The giant hangar is about 15 feet lower than the runway and is connected with a sloping taxiway. This prevents anybody from peeking into the hangar when the doors are open.

The airbase is connected to the Sandia facility 14.6 miles to the south, with an underground subway. 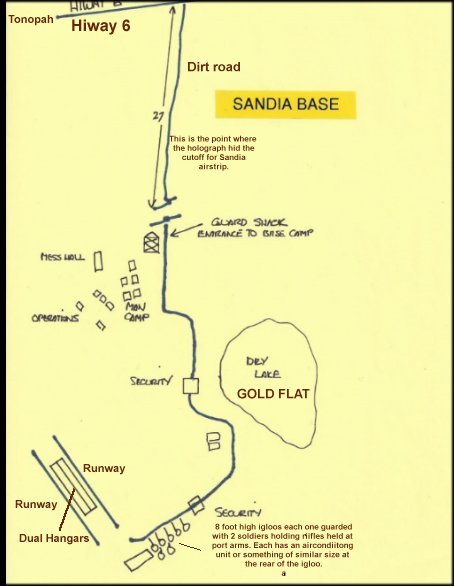 The complex was built so that they could move NORAD and other secret facilities inside the Nevada Test Site and essentially planned to secretly overthrow the Constitutional Republic of the United States of America.

Some informants speculate that this enormous underground facility is not for the overthrow of the government but for protection from some major disaster known only to the shadow government. Informants say that this facility is just part of a huge project which includes 6 lane highways connecting major cities, also built underground, and very large quantities of provisions of food, water and other staples.

Over the past twenty years 18 wheeler truck drivers have reported delivering full truckloads to underground areas located all around the country which are unloaded under heavy guard. 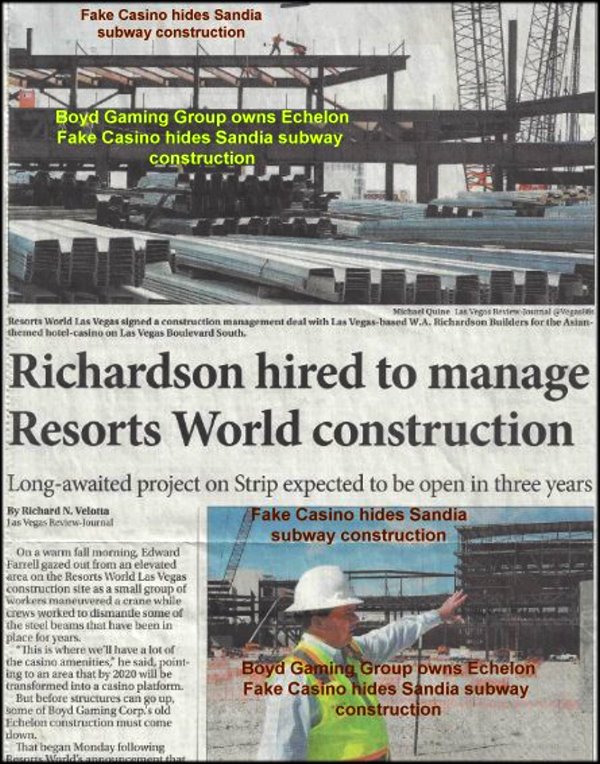 These truck drivers claim there are as many as 50 secret entrances nationwide to these unloading areas. They report that at some entrances they are required to get out of their trucks and let other drivers continue on, returning several hours later to be given back their now empty trucks. They report that they are sworn to secrecy and required to sign security oaths that spell out the penalties which include incarceration and even death should they disclose any part of the operation.

One of the tuck drivers who was also a pilot noticed that one of the underground facilities was inside a mountain near an airport he flew in and out of regularly. He also noticed that the mountain had been removed from aeronautical navigational charts. Navigational approach charts depict all towers, mountains and other obstructions near an airport that a pilot would have to be aware of during his approach. He speculated that some military moron in charge of security probably ordered, “I want that mountain to disappear from every map or chart.” The military moron would not have realized the importance of the location and height of the mountain for aviation operations during inclement weather.

The huge operation at Paiute Mesa employs more than 2000 people and during the past several years has increased security equal to or more restrictive than that required for Groom Lake. In other words people working at this secret base whether going in via the Tonopah Test Range, Mercury or Groom Lake or by Mag-Lev subway from Las Vegas are weighed in and out, are subject to eye scan, facial recognition, palm prints and other highly secret methods of identification.

They even built an enormous prison for anyone disclosing secret information. They did this because they had usually sent convicted guards and other personnel to the federal prison at Lovelock. Unfortunately they realized too late that the convicted prisoners, with nothing to lose were telling the other prisoners about the massive multi-level underground facilities all over the the Nevada Test Site and on other highly secret information. 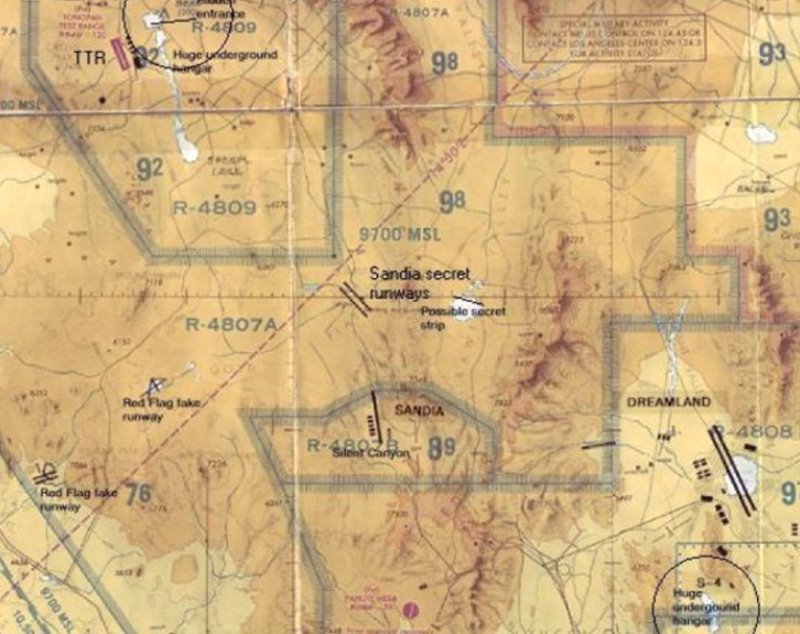 In order to keep the Kingdom secret they needed more than 2000 additional workers daily from Las Vegas. But they had one big problem: how to get 2000 people back and forth daily from Las Vegas without anyone being aware of the existence of the secret base.

So what they did was build an underground tunnel for a high speed Mag-Lev subway that goes from underneath the Luxor to the Bellagio and then direct to the secret base. The trip takes about 21 minutes.

They had to stop underground of the Bellagio because of the huge underground parking area. Workers park there and then enter the hotel through a secret entrance, then go to a hidden entrance where they take secret elevators down to the subway.

To get from the brand new Special Operations terminal to the terminal underground below the Luxor they take a transport and board the Mag-Lev there.

In order to build this subway in secret they had to secure many acres of vacant land. They used the land that was formerly occupied by the Stardust and built a fake casino called the Echelon. The fake casino was designed to hide the construction area from those cars and people on Las Vegas Blvd, the Desert Inn Road and Industrial Road.

They built the framework of the Echelon so that the massive construction project was totally hidden from the public. The plan was after the above ground work was complete to say the casino owners ran out of money, stop the construction of the Echelon and wait for somebody to buy the property which turned out to be Resorts World.

Unfortunately, since the hotel was just a fake they probably didn’t bother to build it to code, which Resorts World is about to find out.

Workers working on the Echelon framework were briefed everyday that if they so much as peeked down at the construction area they had CIA sharpshooters with high powered rifles that would shoot them instantly.

If you would like to know the details of the power outage story just google ‘Bellagio Blackout 2004”. or see here;

Of course this was the largest intelligence disaster in the history of the ‘shadow government’. The secret government had to notify Nevada Power that they had accidentally caused the power failure because they needed their expertise to get the power back on line. Many ‘Accidental Disclosure’ forms had to be generated and signed. The owners of the Bellagio had to be reimbursed for the enormous amount of money they had lost over the 3 days of the blackout.

How they managed to keep it all a secret is beyond me, but they did.

For their part in the October 1 massacre 3 of the 4 shooters used the subway to escape. The fourth shooter escaped in the helicopter he was shooting from. The helicopter was never seen again. For iron clad forensic acoustic details proving the second shooter please see:

Note: You really didn’t think you were going to get away with this did you?

Below I have posted a plan view chart and 2 aerial photos of the Echelon during construction of the secret subway. The notes are my own for which I am fully responsible. I have also posted several photos relating to this massive construction project including a map of the Nevada Test Site, a diagram of the Sandia Airbase, possible locations of other secret bases including the Lime Canyon secret helicopter base on the east side of the Overton arm of Lake Mead, possible secret subway routes throughout Nevada and a newspaper clipping from the Review Journal. Enjoy!