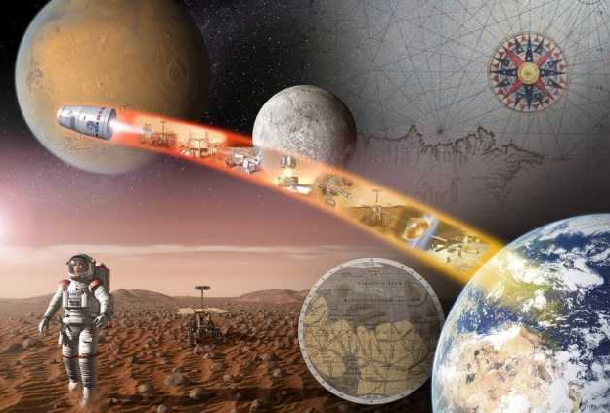 Claiming to be a former NASA employee, a woman said she has seen proof of the biggest cover-up in space history in 1979. She claims to have seen two human figures in space suits walked calmly towards the Viking lander (the older version of today’s Mars Curiosity Rover) in the Martian surface.

Coast to Coast AM in America received a call this year from Jackie, who asked the presenter to investigate a 27-year-old mystery for her.

Jackie said she handled downlink telemetry from the lander for NASA when she noticed two people walking on the surface.

She said the Viking rover was running around while she and six colleagues were observing on multiple screens. Then she saw two men in space suits, which were not bulky but looked protective. These men came over the horizon walking towards the Viking Explorer.

What Jackie and her colleagues had witnessed seemed a little odd considering that if humans were there, they could just fill the lander with petrol or take photographs themselves instead.

To Jackie’s estimate, there were around half a dozen of them downstairs working to maintain the equipment. Then their video feed was cut off.

They ran upstairs, but the mysterious men locked the door and covered it with paper so Jackie and her colleagues could not see. Jackie has been wondering if those were their guys.

Conspiracy theorists claim there were secret landings on the Red Planet in the Sixties, and the Apollo landings were just a cover-up for wider solar system exploration.

John Lear, the former CIA pilot, claims that NASA made a landing on Mars in 1966 and that humans adapted to breath the thin atmosphere of the planet.

However, it is important also to note that Lear thinks human souls travel to the moon when they die and processed inside a mile-high glass tower. Lear also believes that the toxic, crushingly dense Venus is green and beautiful.

The Haynes UFO Investigations Manual author, Nigel Watson, says these reports or claims of secret space missions appear to be growing in number and remind him of the infamous Project Serpo.

An anonymous man claimed in November 2005 that they worked for the US Defense Intelligence Agency (DIA) and started sending information on Project Serpo, an alien exchange programme.

e said that six aliens were retrieved from the Roswell crash.