Hidden high atop the mountainside along Going-to-the-Sun Road at more than 6,600’ is the secret tunnel entrance to an extensive underground Nazi/CIA facility (48.7474°N 113.7633°W). In the above satellite image, the larger circle denotes the hidden rock façade entrance and the smaller circle denotes the position of camouflaged guards. The secret tunnel descends more than two miles to a giant hollowed-out industrial complex below the mountain. This hugeunderground city/base connects Montana to Canada just north of the national border at the (cleverly named) International Peace Park.
This underground base is where the CIA keeps its stolen Holocaust trillions and tests its most secret New World Order black projects including Tesla’s flying disc, optically invisible aircraft and other stolen
Tesla technologies.10 Operations at the base include maintenance and deployment of stealth drones.

Glacier National Park was the first national park to have railroad access at the time – a necessity for all large-scale underground military-industrial construction. This enabled the CIA’s New World Order Nazis to transport the rumored Nazi-gold train of stolen holocaust loot from Montauk, NY to the secret base located inside the mountain. On the promontory above the secret tunnel entrance there is a strange looking outcropping of rocks that at certain times of the day looks like a grizzly bear, hence the name ‘Grizzly Peak’. The CIA uses this secret tunnel route to illegally smuggle drugs, guns, SS Nazi war criminals and dignitaries into Canada without stopping at any border crossings.11 Because the archived surrender agreement of Nazi Germany has been forged, Canada has been hiding and supporting CIA Nazis just like America has been. Canada aligned itself with England, France and Italy in forming a secret fascist agreement with Hitler’s Nazi Germany, the results of which can be clearly seen in their unified front of complete denial of the existence of extraterrestrials and spacecraft debris found.

The secret tunnel entrance to the CIA’s New World Order underground base is hidden behind a remote-controlled, movable rock-wall located in the side of the mountain on Going-to-the-Sun Road, shown in Skorzeny’s photograph above, just north of Grizzly Peak and the Weeping Wall. In the far background the Garden Wall can be seen, and at far right is the base of Haystack Butte. The tunnel
entrance (shadowed overhang circled, bottom right) was cut out of the bedrock by precision laser to prevent any possible discovery. When the base is active during the summer months, there are armed
and camouflaged guards hiding on the mountainside (upper left corner) surrounding the secret tunnel entrance. The Nazi New World Order keeps its stolen holocaust trillions and stolen Tesla technology
secretly hidden inside this hollowed-out mountain facility, providing access only to the New World Order elite who have shared in the mass murder for profit war scams. 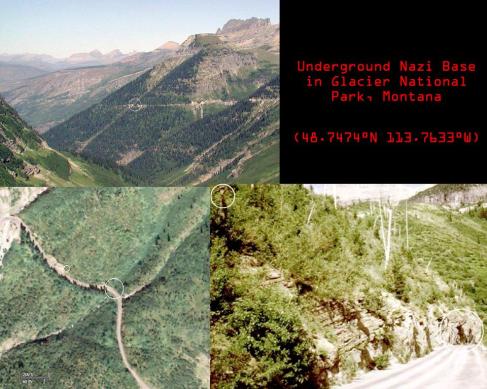