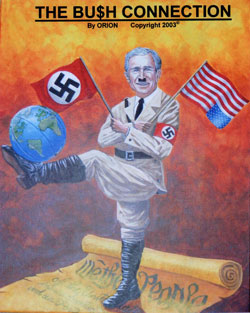 “Für uns, ist der Krieg niemals vorbei (For us, the war is never over).”

BERTRAND DAILY REPORT The War For Your Mind & Soul Continues

I don’t know about you….but I feel as though I’m living in a parallel universe that is overlapping as we speak.

Last night, I received information from a source that does not want to be acknowledged and it is as though, ALL OF US are thinking the same thing about how outrageous the GHWB death is being portrayed instead of what it’s really about…..the death of a Deep State (NAZI) illuminati.

There is NOT one news media (Left or Right) detailing the extreme crimes perpetrated by GHWB and his connections to Hitler as a “trained SS spy to infiltrate Wall Street in America.”

When Hitler was secretly exiled, the “Third Reich” was cleverly brought to the United States under ‘Operation Paperclip,” and the ‘Fourth Reich’ began. The CIA was organized by former SS Nazi’s and the massive corruption began and has grown since…..(This is a story about a ‘Shadow Government’s drive for a New World Order)

The advancement of the Nazi secret space program began in America while Prescott Sheldon Bush Sr. stole all documents and plans for advanced technology from Tesla, of whom was a “trusted associate” of Nikola Tesla.

The events leading-up to the Tesla documents, followed by his death is very complicated and is lengthy.

The media (this week) is praising GHWB as a hero, soft spoken, great leader….”the most popular and greatest single term president in the history of the United States”

NOT one mention about the ‘Franklin Scandal’ pedophile / child trafficking network, controlled by the GHWB White House, plus the satanic rituals involving child sacrifices.

Mourning his loss is 24/7 news for the entire week and the perfect opportunity for suppressing this week’s Deep State hearings. What’s next?? (Jimmy Carter??).

“Skorzeny [pictured next to Hitler] did not stop there. [death bed confession] He produced a photo of a young Skorzeny, Mengele, Bormann, and the family of George H. Scherff, Sr. Seated in the midst of those in the photo was a young George H. Scherff, Jr., [a.k.a. GHWB] who, Skorzeny explained, was trained as a spy and sent to America to work for Adolph Hitler. ” [GHWB was adopted by Prescott Bush] 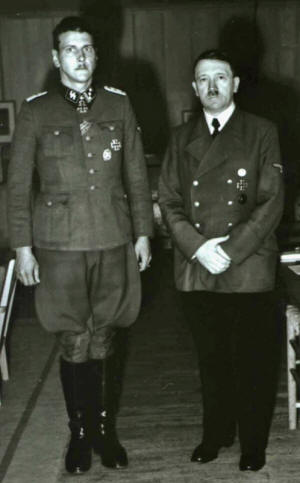 “He was given false identification and adopted by Prescott Sheldon Bush as his “son,” George Herbert Walker Bush.”

“Skorzeny’s [Hitler’s bodyguard] account of a “forged birth certificate,” underage enlistment in the Navy (facilitated by his father), and GHSII/GHWB’s abandonment of his two crew members when their damaged navy plane was capable of landing, was a chilling revelation describing the darker side of the navy’s “youngest pilot.”

GHSII/GHWB, to his dismay, also appears in a photograph taken at theTexas School Book Depository, Dallas, Texas, on November 22, 1963, after the assassination of President John F. Kennedy. Despite his admitted “failure to recall his whereabouts” on that fateful day, he (as an agent with the CIA) was debriefed by FBI Director J. Edgar Hoover the following day. [54]

In 1993, a little-known document surfaced which described, not only this debriefing, but GHSII/GHWB involvement with the CIA as early as 1960 (Recall Skorzeny’s statement in 1999 that he co-founded the CIA with “George H.W. Bush” at the end of WW II). Incredibly, another “George Bush” who worked at the CIA caused the “confusion,” so GHSII/GHWB escaped suspicion as a participant in the assassination.”

“Skorzeny was Hitler’s bodyguard and SS spy/assassin who came to the U.S. after the war under Project Paperclip. Skorzeny and GHW Bush were instrumental in merging Nazi (SS) intelligence with the OSI to form the CIA with “Wild Bill” Donovan and Allen Dulles.

These guys were also part of CIA mind control experiments such as MK-ULTRA. SS officer and physician Joseph Mengele, the notoriously sadistic “Angel of Death” of Auschwitz, escaped Germany to South America after the war. George H. Scherff, Jr., became the 41st President of the United States as GHW Bush and George H. Scherff, Sr., was Nicola Tesla’s “trusted assistant.”

Since it is a congressionally established fact that Prescott Bush was in business with the Nazis during WWII, we can safely say that the Bush/Nazi connection existed. ”

One of the most disturbing acts of Pedophilia, MK-Ultra Mind Control, Torture and Child Prostitution and Trafficking by GHWB and the cover-up by the CIA and FBI is detailed below…..

Please continue here for more from this source: >>>