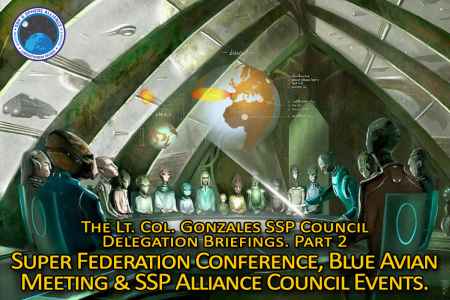 The world we live in is far more remarkable than most people could ever have imagined. Our military-industrial complex has secretly colonized our solar system – and beyond.

The technology that already exists, today, built by defense contractors who hold corporate facilities here on earth, satisfies every wish you’ve ever had for a high-tech future – from any sci-fi movie you could possibly think of.

An alliance has formed within what we call the Secret Space Program, or SSP. The goal of the Alliance is to defeat the “Babylonian Money Magic System” and end financial tyranny on earth.

The Alliance wants to restore order and justice and civility to our world – and release the planet-healing, life-extending, hyper-futuristic technology they possess to everyone.

All the bases and colonies they have constructed will be made available to us if this plan is a success. And traveling to them will be just one portal hop or shuttle ride away.

My main contact in this world has been Lt. Col. Gonzales. The experiences he and I have been having seem very “far out” to most people, and have led to inevitable skepticism.

If you are new to this story, it may all seem quite impossible to believe. I understand that. My job is simply to tell you the truth of my ongoing experiences.

This article is a follow-up to Part 1, where we discussed some of the information that Lt. Col. Gonzales had briefed me on in two separate meetings he had not far from where I live.

We discussed Gonzales’ dramatic meeting with the Draco White Royal, and his interaction with four of the chairmen of the Committee of 200 when he stood in as the main delegate for the Sphere Beings that are helping us out.

We are going to rejoin those two conversations and pick up where we left off to discuss the other meetings that Gonzales attended in my absence.

This all took place while I was off shooting the Gaiam TV show “Cosmic Disclosure” with David Wilcock. If you have not completed Part 1 of this article, I would recommend doing so before reading Part 2.

It definitely appears that writing these articles and doing this new show has also increased the amount of “negative greetings” (as DW calls them, based on terminology from the Law of One series) I have received recently.

I am not a huge believer in coincidence. The number of negative things that have occurred to my family and myself since I was briefed by Gonzales, started writing updates and working on these articles is incredible.

These negative incidents have been so in-your-face and clearly intentional that it is more than obvious that this is a Yin and Yang sort of energy battle for balance occurring.

The latest event of this type was yesterday morning. I woke up and had been bitten by a spider that left a large bite on my hip, at the belt line. I had to have it treated, as it was swollen up like a balloon.

I was getting muscle aches, headaches and stomach issues. All I felt like doing was laying around. I managed to get out for a little while to find a peaceful place to work on finishing up this article and beginning the next one.

I also discovered that some people I considered friends had contacted bloggers who are known to attack me. They provided untrue and negatively-toned information about David Wilcock and myself.

They were upset that they couldn’t get ahold of me through any of my older contact methods for almost 2 months. However, they never even tried to contact me through my webpage. When asked about it, they just rationalized their behavior and were unapologetic.

It has been upsetting to see how quickly people you think are your friends and claim to be on the path of Service to Others and spiritual enlightenment in this field can turn against you — in such emotionally triggered, reactionary or egotistical ways.

The balance appeared within 5 days, when four of the people who have made a mission out of attacking me in online posts and email campaigns to researchers got in contact with me — and apologized.

I apologized for anything I may have done to upset them, given how distracting and bizarre all of this has been for me. I told each of them I would be a hypocrite if I didn’t forgive them.

In turn, a couple of them sent me quite a lot of information that lined up with information and transcripts I had received directly from other sources. At the time I wasn’t entirely sure if it was all true – but that doubt has now been removed.

Two of people have now sent me quite a number of Skype logs and email conversations among a small but dedicated “cell” of bloggers, forum moderators, former friends and once well-known researchers who have been conspiring to bring down David Wilcock and myself.

Gonzales had told me that this was going on, but the scope of it, and the amount of spite, unethical behavior and outright hatred in how they spoke about us and conspired with each other, has been truly shocking.

One of the people in question is talented at audio remixing. He has produced edited and fake skype conversations to make David and myself appear to have a said or written certain to each other and to the person doing the cutting and splicing.

David and I both keep local copies of all his Skype calls and text.log files for our own protection, in case of events just like this. It will be very interesting to identify exactly how this was done, and which questions were deliberately planted to generate useful audio clips in response.

Having this handful of people contact me and make amends has been a nice balance to the Yin and Yang of the negativity that has been going on (not so secretly) in the background.

Forgiving and loving those who you have wronged, or who have wronged you, can be very liberating for both parties. One of the people said that since we have reached this point of forgiveness, they have slept better than they have in some time. It had the same stress-relieving and spiritual effect on me as well.

Because of the nasty spider bite, I ended up going to bed at 5pm Central time and slept until 3:30 this morning. I decided to use the peace and quiet to make the final edits to this article and get it posted.

I am also looking forward to listening to Dr. Michael Salla’s interview on Coast to Coast last night (7/12) with George Noory. Next week I am going to be a recording a couple of episodes as a guest on George Noory’s Gaiam TV show, “Beyond Belief”.

Since some have asked, subscribers do get access to the complete collection of over 6000 unique titles and programs on Gaiam TV. You do not need to “pay as you go” or take shows on as package deals. You get it all in the basic price.