I was put in a Technological Suit (updated 7-23)

Hi James it’s a bit confusing but I wanted to find out a little more about super soldiers. I find a little difficult to explain all at once, I don’t have any physical abduction, but got dreams I started to remember from about a year. Lucid dreams that showed me very deep side of me, with those Draco living being.

And this days I was watching Simon Parkes interview and many souls signal come up when I was listening to the super soldier thing. I have many military dream, but it’s full of archetypal things that isn’t very easy to understand what is real and what is not. I’m this journey to find out more about all what concern myself, a little by little. But there isn’t many that talk about this issue.

I remember “mission” concerning 1 or second world war, and mainly modern type, like assaulting us army ship, I think was US, but it was night and at some point I got away of that ship going into another one, like preparing for another mission but I was put in a technological suit, very rusty I barely repaired myself.

Last night I saw like a open classroom facing in a desert like scenario, like a roman forum in line not as C shape but as I, where the sits was for the mans that was waiting for the assignation to the job. Everyone was in a white clothes robe. This place was also the one where dead soldiers souls come back to be re-assign to another job. I felt clearly like the souls of the dead soldiers was coming back at that place, but the only distinction from one guy to another was that the dead one was of black carnation. Everyone was watching ahead, and when the mans for the job was called by they’r name everyone was saying something like a “chant” like a war cry, I said that too but many peoples watched at me like “wtf”.

My experience is mainly with draco/reptile, very few mantis and mainly USS soldiers. Sometimes ago a uss captain ordered me to “heal” a thoracic wounds of a reptile, but I think was like to “reconnect” my relationship with him. The wounds was internal, my job was to reconnect his fiber. I didn’t do that, I just kindly used a saw to chop of his head instead, except for choosing at the end to not do anything instead.

Sounds like the ETs are using you for their milab program but you like so many others probably have a heavy learning curve ahead of you to figure out whats going on. Can you draw the picture of the suit. – James Rink

I can draw it, but I barely saw the right leg, I gotta remember the others one. Hmm it wasn’t really easy to use, it was rough iron man suit combined with a exoskeleton. I don’t know why I remember it like it was a peace of steel very difficult to move around, but the other guy preparing with me was moving pretty well, maybe they couldn’t run so easily but still moving pretty well. 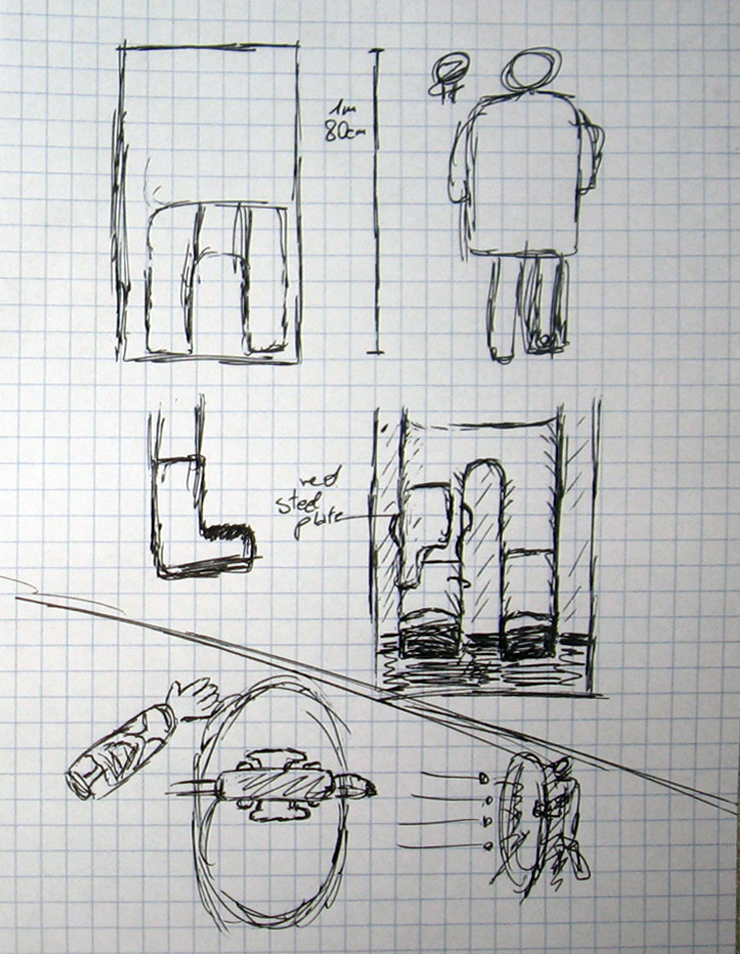 I used a blowtorch to repair that suit; I really remember well the plate on the right leg, and it was red. Some cable was coming of the suit, not in the front, but from the sides.

When I was in one of this I was pretty comfortable, but I don’t remember how I get out, I mean I could sense the skin touching the suit.

I remember also the left forearm i lend to the guy I supposed to kill, in that underground bunker. The suit was like the one in iron man, I mean for the shape, the forearm supposed to protect him at his will, it create a energetic shield depending on the will of the user, on his will to survive. It extend himself to release this thing that protect him from the bullets and some explosion. Wasn’t enough for the tanks, but it was a last defense if I couldn’t make it for them. I will pay much more attention to what I will see.

Do you know if this soldier are send in Afghanistan or Iraq? Because it seem like I was retrained in this days, and the place where we was sent was Afghanistan; in that dream I was surprised because we were sent in Iraq, commonly, to train.

I saw also myself in a training camp in US (I live in Italy btw), we were there like newbie, and happened something strange that I didn’t remember, and to the guy who asked us who we were, we replied Ohio, idk why I mean I know that to enter the army you gotta be US citizen. We wasn’t the suspected one, but we were around there at the fact.

Returning to the suit, I remember that before arriving to the carrier ship, like I said I was into another ship assassinating soldiers. And after that I was in the other carrier. Ah the first ship was a battleship, was smaller than the second, and at the center had a second level platform:

I was pretty silent, none of them could hear me, and my jump was really high, 2 to 3 meters, also if I would have to say that better then jumping it seemed to fly.

Do you think that there’s something that could be real about this military dreams?

Yes it appears you are doing more then dreaming lol.