MASSIVE UNDERWATER ENTRANCE DISCOVERED OFF THE CALIFORNIA COAST – MAY 22, 2014

A massive underwater entrance has been discovered off the Malibu, CA coast at Point Dume which appears to be the Holy Grail of UFO/USO researchers that have been looking for it over the last 40 years. 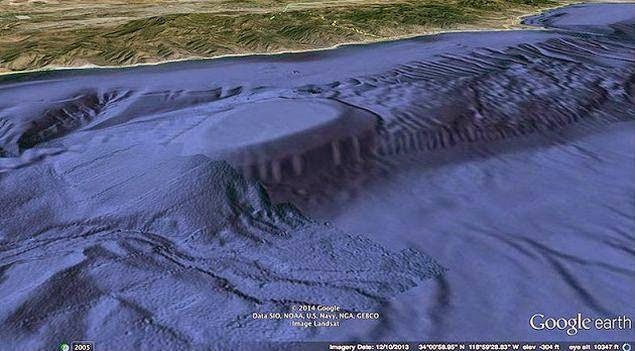 The plateau structure is 1.35 miles x 2.45 miles wide, 6.66 miles from land and the entrance between the support pillars is 2745 feet wide and 630 feet tall. It also has what looks like a total nuclear bomb proof ceiling that is 500 feet thick.

The discovery was made by Maxwell, Dale Romero and Jimmy Church, host of FADE to BLACK on the Dark Matter Radio Network on Monday, May 12th 2014 and announced on Facebook, Twitter and Church’s radio program the following day. 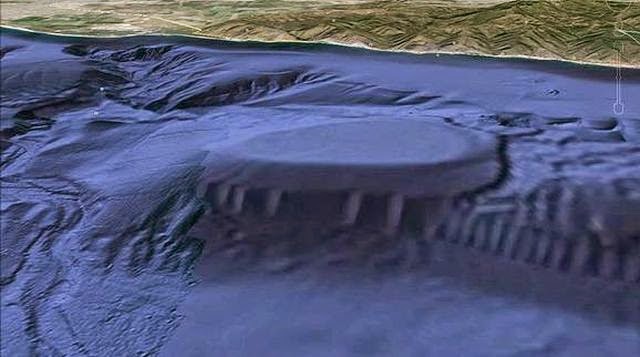 The underwater base has been a mystery for many years with hundreds of UFO/USO sightings…many with photographs…but the entrance of the base has remained elusive…until now. The entrance can support nuclear sized submarines and massive UFO/USO activity and allow access to different military installations that are inside the US such as the China Lake Naval Base that is in the middle of the Mojave desert and the Naval Undersea Warfare Center in Hawthorne, NV between Las Vegas and Reno.

In the photographs you can see its relation to the coastline, Los Angeles and its natural surroundings which to not match up with the structure itself…which is massive in scale. The support pillars to the entrance are over 600 feet tall. 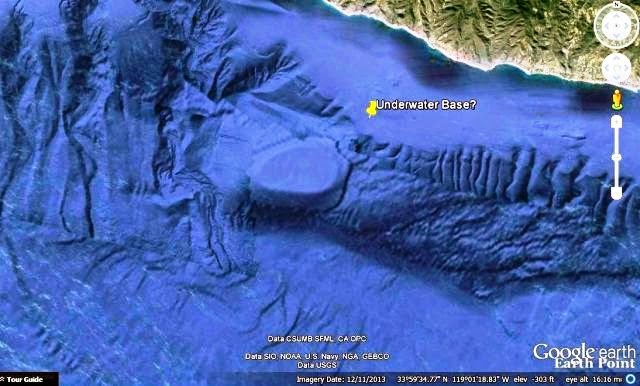 Malibu, California, is known the world over for its scenic beauty and as the playground of the rich and famous. Few people know that it is also the land of UFOs. In the late 1950s, as my neighbor and some of his friends were watching the sun setting on the Pacific Ocean, they witnessed three bright UFOs fly across the water at great speed then hover for a few minutes over the Santa Monica Mountains before flying off out of sight.

My family moved in around 1962. We had a perfect view of Zuma Beach in our front yard with the mountains for our backyard, and the star-filled sky above us at night. During the 1960s, people were frequently seeing UFOs flying around Malibu, but a lot of people were taking hallucinogenic substances in those days too.

However, by the early 1970s, whole families were going down to the beach at Point Dume at night to watch the multicolored UFOs that would sink under the water at times.