For the record James Rink and Super Soldier Talk will no longer have any association with the person who coins himself Jay Collins, Jay Boyd, aka Jay the MIB. Jay has been caught making up numerous lies, stirring up the pot so the speak. For the record he is not my father and I highly doubt he is thousands of years old. Sabertooth did not shape shift and break his arm like he alleges, as I am not allowed to shape shift in this dimension. He does not have a alter named James and I believe he chose that name due to his infatuation with me and my experiences. I don’t believe he was even in the special forces. And further vetting has shown he has never been used by milabs or even the MIBS. And if he was a MIB it was a long long time ago and chances are he was kicked out of that organization for reasons I can only speculate at this time.

While visiting Jay in California, we traveled to meet up with one of my friends, who granted me permission to regress her 5 year old boy who has been caught speaking in alien languages when he gets angry.  During this session this young boy informed me that the line of questioning we where pursuing was not important to know at this time. I was about to guide him on another path when Jay interrupted me and then proceeded to take over the session distracting me from reaching the goal. I didn’t say anything about his uncouth behavior in the hopes Jay would apologize on his own freewill.

Later that evening as we where driving back to his place where I was staying. He commented how it was a wonderful day and asked me if anything could have been better. I brought to his attention how important it is , that he does not interrupt me when i am regressing others as it causes me to loose my concentration and for now on he will have to stay outside the room during these sessions. I also brought to his attention how the boy remarked that the current line of questions Jay was pursing was not important to know at that time and how unfair he was being towards the boy.

Jays demeanor changed and demanded that I never talk to him like that again and how i wasn’t allowing the boy to speak. He then threatened to cut my head off and dump me and my luggage in the ghetto of San Bernardino if I ever did that to him again.

During this time my cell phone was broken and I was unable to call my friends for help. Additionally he did not let me have access to his wifi.  And I was unable to leave on foot because I have been dealing with a sore throat for three months now. I was no position to gather my belongings and promenade about in the cool desert nights in the ghetto of San Bernardino at 2 am in the morning in order to seek help.

For the rest of my trip I played it cool and when I safely arrived home, Erin Hicks and I compared notes and found numerous discrepancies in much of Jays stories with wild variations of his alleged income, his private life, and more. Erin immediately cut all her ties with Jay. Jay in turn threatened me again and declared if I turn on him like Erin just did he would come out to NC and bury me. He also brought up how he spent $2100 dollars on my visit but told Erin it was closer to $3500, these figures are highly questionable as i paid for some of the food bill and gas money as well. I then informed Jay, that when you visit a friend you don’t make threat’s against them if you disagree about something; nor do you bring up how much money you spent on them, because if your a friend with someone you share freely with love because that’s what a true friend would do.

As far as his regression is concerned it is my belief he was most likely remote viewing my experiences colored by a fictional story of his own imagination. Therefore I am choosing to remove his regression from the public forum at this time. Sadly Michael Prince was caught up in all this too and it appears much of his regression has been colored by Jays input. With that said I feel parts of Michael Princes regression carries some merit and shouldn’t be totally discarded.

I like to hear your feedback. Do you feel I am mistaken and Jay is a authentic MIB who has gone off the reservation? Or is he simply lonely soul looking for excitement in his life and found it by stepping into the drama of the lives of truamtized milab victims.  – James Rink 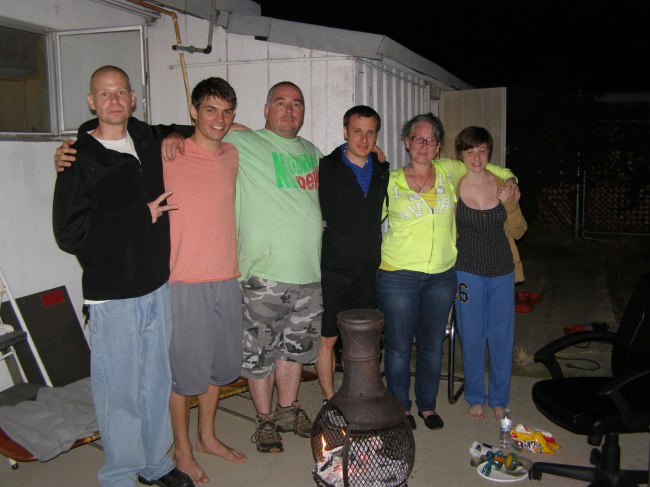 Jay is on the far left. I am wearing the blue shirt in the middle and Erin Hicks is wearing a neon green blazer.

Dear James. Jay is a grey clone…a body that holds a grey he isn’t of much status. But they can be a pain, and cause chaos. And that was his mission. – A

Jay TRIED to become my handler and failed miserably then I caught him in a myriad of lies…..He tells James that he has $1 million in the bank….then tells me  he has 400k buried…oh then there is that arrest supposedly for a ‘raid’ his dispensaries ..he MAY have owned one, but six? No…..AND  he said his truck was repoed during the drug bust. If so, you wouldn’t of had your truck back as California KEEPS vehicles that are impounded for drug arrests…..lies lies lies lies…….

I love you dearly Jay, but please please get stories straight. You have a good heart, you need to see that and stop lying so much. Don’t attack me back, I have so many more lies I can put out there to show as well. I’m not at all attacking you-but how can you do this to those who are credible?! You even had me fooled for a while until you scared me in my OWN HOME.

I ONLY want truth, that’s it. Complete truth. I don’t sway….EVER….from any of my story one bit. Yet I see in his video things you’ve said that do not go along with what you’ve told me, some of it’s opposite of what you’ve told me. And then there’s others with another story you’ve told them. When you look at truth in any of us milabs or SS’s, etc…you must look at consistency. – Erin Hicks

Wow James….well it seems that your intuition is well practiced….i guess you have to at least give people the benefit of the doubt to start …must be disappointing to put work into people who do that to you…it seems like the erin lady is a sincere friend to you. So, how do people like Jay get 2 or 3 interviews before someone thinks they’re full of bologna? – T