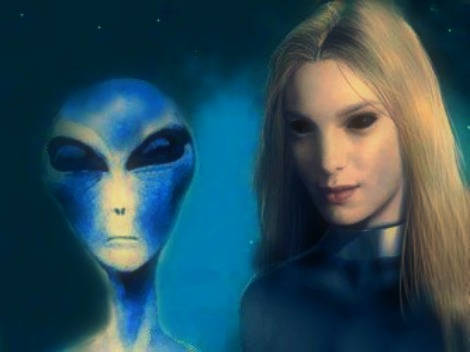 Jamie Brian: A few months ago I was scanning Youtube, watching videos in which people discuss their own personal paranormal stories. There are hundreds of such videos on Youtube and I try to keep my eye on the UFO related ones. I found one video from a person named Dustin where he explained how he was out hunting rabbits with a friend when they encountered a UFO and strange beings including a blonde, Nordic type female.

Quoting Dustin, from his video “My UFO Story”:

A few years back, I think about 2006 or 2007, around that time, me and my friend went rabbit hunting on his uncle’s land and it was getting late at night. I would say it was getting around 6:00 o’clock. It was just around getting ready to get dark and we shot about 3 or 4 rabbits and stuff. We was getting close to a creek bed. By the time we got to the old dry…it was an old dry creek bed and when we got to the creek bed, my friend Rick, tapped me on the shoulder and said, “Look up!” So we look up and what we saw was like a star but it wasn’t a star. It was moving. It was zig zagging. It was going this way, going that way, going up and down until it got closer…I mean it got lower to the ground, getting lower to the tip top of the trees there. And we could make out what it was – it was a UFO. It was saucer-shaped, silver in color; blue and green lights and red lights. It had a big light beam underneath, like it was a spotlight on the ground when it was flying over.

Rick and I got into the creek bed and there was a whole bunch of old weeds and stuff…we covered ourselves up so we wouldn’t be spotted because this darn thing was right over us. And then it went back and forth. Then it traveled about 300 yards in the field and it landed. And it just sat there for a moment. We were just peeping over the creek bed…we were just looking at this darn thing. We were in shock…we didn’t know what to think. So it was on the ground for a few minutes. Now here comes the weird part. All of a sudden the doors, something… like a light came underneath it and a ramp was coming down at the bottom of it. I say, this damn thing was bigger than a darn football field. It had to be as big as a football field. Then low and behold a woman came out of this damn thing. Yes, a woman. That’s what we saw. This darn thing was 300 yards away. We had a good pair of high powerful binoculars and we saw pretty well…it was a woman. It looked like she had to be in her late 30s or something. And when she came out, she had long blonde hair, came all the way down to her butt. And she had on like a blue skintight suit or something – solid blue. I mean she looked just like…like us. I mean she looked just like a human female. Strange, huh?

I told you it was going to be strange. But that’s what my friend and I saw. You don’t have to believe me. She came walking out, just looking around her surroundings and stuff. And a minute later, little grays came out behind her. And they were all walking around the ship…examining the ground and stuff. I said, “Rick, we need to get the hell out of here before they see us.” I mean, he didn’t say nothing…he was so scared. He couldn’t really move.

They stayed there for a few minutes or so until they looked up into the sky. I think there was something up in the sky that kind of spooked them and they ran back in the craft. The woman was about to walk back in and she turned around – and I had the binoculars focused on her – and she turned around and looked in my direction and I think she kinda did that (mimics a wink with his right eye) or something, I don’t know. And all of a sudden she just turned around and went up into the ship and they took off. I told Rick, “Ain’t nobody gonna believe us, what we just saw.” He said, “No they ain’t.” We went back to the house, cleaned the rabbits and we had some good rabbit stew that night. We just kept this to ourselves until about a year later and we told our friends about it. They thought we were nuts. They thought we were on drugs. We went out the next day and we saw where the UFO landed. It had big burnt circle on the grass. My friend took pictures of it.

NOTE: I had to paraphrase some of the written dialogue. Lon