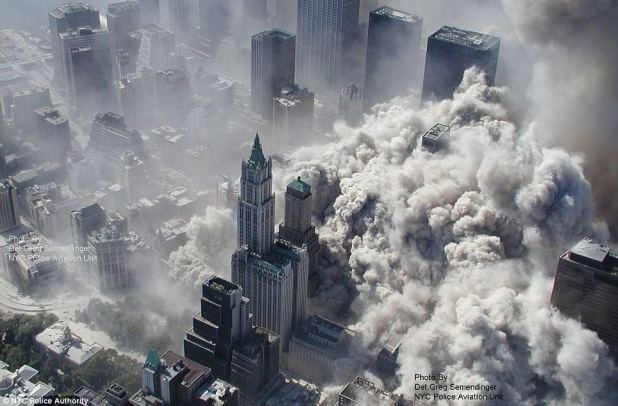 The following interview by US Intelligence is the most shocking I have ever heard.  Gordon Duff released bombshell after bombshell in this hour and 38 minutes.   The Russians just released some key information about 9/11, ISIS and much more.

Never in history have the names of those involved been released that were involved in the attacks.  It includes a person that became the first head of the Department of Homeland Security, a Former Mayor of New York City during 9/11 and the Police Commissioner of New York City during 9/11.   Most of you are smart enough to either know whose these people are or can Google to see who I’m talking about.  Since Gordon did not actually name them I’m not going to name them either but it doesn’t take a rocket scientist to figure it out.

Gordon Duff Reveals Huge Russian and US Intelligence On Who Did 9/11 and Much More.  Listen to the entire interview.  The micro nuke information and 9/11 begins around the 32:00 minute mark but other critical information cane found at the beginning, too.

The following are some of my notes from this interview.  So much was covered, this is only part of it.

Gordon covers how Daily Kos is a piece of garbage media operation that is trying to cover up the murder plot by Senator Songstad and Governor Sundquist that was broken right here on BIN.  Daily Kos said that US Intelligence made it all up.  Gordon challenges everybody to match the voices for themselves and challenges everybody to get the word out on this HUGE story.  All the fakes in alternative media (tip of spear people) have censored it.

VeteransToday now has more nuclear weapons designers on staff as writers and technical advisers than the country of Iran.  Gordon reveals he runs the largest worldwide intelligence operation in the world and was in charge of security for Leo Wanta after President H.W. Bush put him in prison and stole the money meant for the American people.  $27 Trillion!  By the way, the tip of the spear person in alternative media still lies and says Lee Wanta is “as real as the Easter Bunny”.  Remember all lies come from satan!  These fakes in alternative media also keep telling eerybody to get thieir information from Drudge when US Intel has already revealed Drudge is an Israeli agent working for the same people that nuked our towers on 9/11.   This word must get out.

The war in Ukraine is now officially a nuclear war.  VT sent photos of the strike on the factory in Donetsk and their initial analysis says it was a Lance missile that is only used by Israel and was designed to carry a micro nuke.  A nuclear weapon might have also been used in Lugansk.

Russians are very upset at what has happened in Ukraine and to retaliate have released a treasure trove of Intel to Gordon Duff and US Intelligence that confirms and puts together more pieces of the puzzle about 9/11, ISIS and more.  They know that micro nukes were used at 9/11, Oklahoma City, Khobar Towers in Saudi Arabia, Bali and more locations.  Israel stole the micro nukes from the Pentax facility in Texas with the help of officials in the Dept of Energy who told them the exact ones to steal and gave them highly classified data that allowed them to turn them into viable weapons to replenish Israel’s nuclear weapons.  Victor Bout (Lord of War) helped in the stealing of these weapons.

Gordon discusses project “Able Danger” which began after the IEAE put out a report that declared a micro-nuke was used to take down the federal building in Oklahoma City.  The fertilizer bomb did nothing.

Monica Lewinsky was a Mossad asset used to blackmail Clinton into stopping the investigation of Oklahoma City and the micronuke used there.

Gordon released the shocking information about the attack on the pentagon on 9/11.  A US Tomahawk missile was used on the Pentagon and it was done to murder the US Navy investigators (Able Danger) looking into the theft of $2 Trillion from the Pentagon and missing nukes.  They called an emergency meeting of this team and put them into a conference room and then hit that room with the cruise missile killing 35 out of 50 of the investigators.  It was murder.

Reports that Russians sent to US Intelligence show the people that planned 9/11 attack to stop the Able Danger investigations.

ISIS is run by the same group that did 9/11.  This group is run out of Cuba and controls members of Congress with bribes, prostitution, gambling money from Las Vegas and Macau.  They launder their cash through Mitt Romney’s Bain capital and use Cuba as their playground.  US Intelligence has videos of all of them.   They know who they are.

1st Director of the Department of Homeland Security was the head of Alqaeda now ISIS.  Assisting him was a US Attorney who handled all of the 9/11 investigations.

US Intel has an indication of a present nuclear threat against the US.

The police commissioner of NYC during 9/11 is involved in the 9/11 attack.  He took possession of the Israelis caught trying to bomb one of the tunnels and let them go and they were never seen again.

There were business leaders in Manhattan that were protected on 9/11.  Warren Buffet called select business leaders and CEO’s of key firms in the World Trade Centers to a golf game he put on.   These leaders never went to the golf game though, they went to a secure Air Force base to ride out the attack.

The fertilizer plant that blew up in Texas was one of the locations where the stolen nuclear weapons went through.  They blew up the plant to cover their tracks.

Certain authorities were informed about payoffs to people in US Congress and others over 9/11 by US Intel and have seized those bank accounts shutting off their bribe money.  This is GOOD news.

People now know who controls ISIS and because of US Intel’s work.  Their plan was to seize all of the oil in the middle east, drop the price of the oil to break Russia and then control it all.  That’s not going to be allowed to happen now.

During 9/11 Israeli teams planted jammers in high rises all over NYC.  These jammers stopped the radios from working for the Fire and Police.  Those jammers were recovered and are now in evidence at the grand jury in Houston.

One Israeli group trying to bomb the George Washington bridge was released to an FBI agent.  But the FBI agent was really a Mossad agent that was authorized to carry FBI ID.  He let them go.

Israeli teams were going to blow up the Holland and Lincoln tunnel.  One was caught when they turned around from a police road block.

9/11 was a big pay day ($9 billion) and was done to kill as many enemies as possible.  Then they made sure to put in people so that investigations would never be done.

$20 million bribes were given to hundreds of people to keep them quiet about 9/11.  These people have now been cut off from their cash due to US Intel.

US Intel asks all patriots to get this information out because it’s being censored by all mainstream media and all fake alternative media (tip of the spear types).