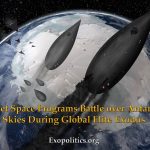 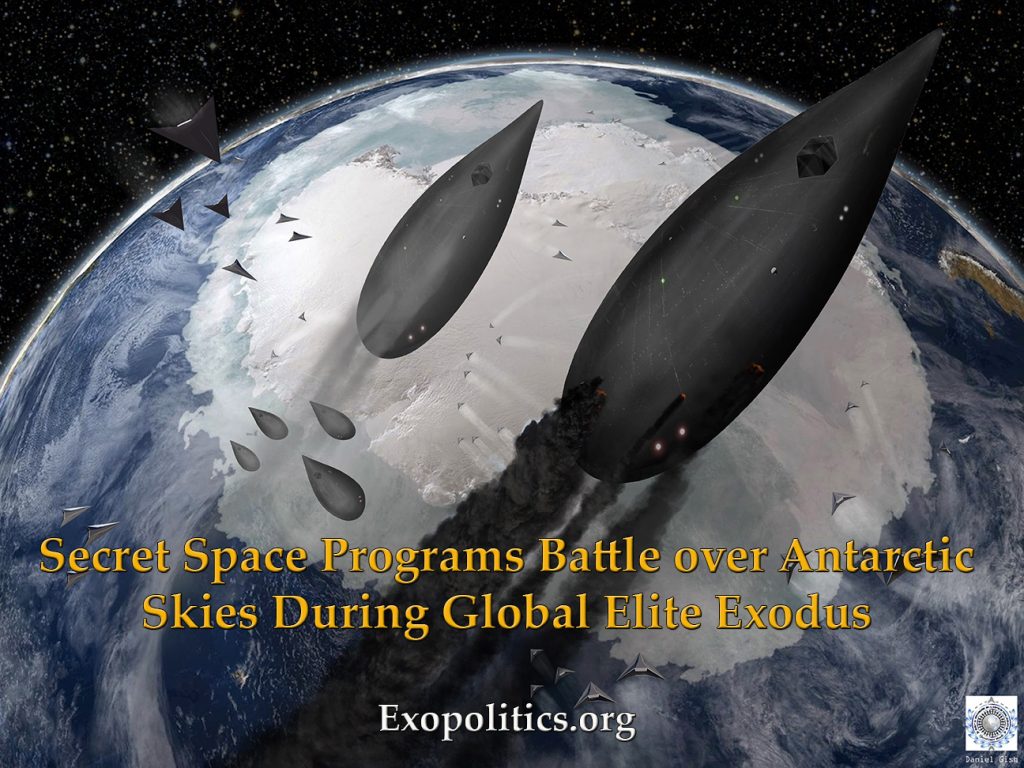 On June 15, I received an informal “briefing” by secret space program whistleblower, Corey Goode, about recent events that include an aerial battle over Antarctica involving various syndicate groups (Cabal/Illuminati) that had over the last six months fled there, and also the current status of negotiations involving different extraterrestrial and “Inner Earth” civilizations over “open contact” with humanity.
What follows will appear fantastic to those new to Goode’s revelations, which he has been releasing over the last 18 months. A detailed resource page has been created listing most of Goode’s interviews, reports, videos, along with articles about him.
My own detailed investigation of Goode was released in the book, Insiders Reveal Secret Space Programs and Extraterrestrial Alliances (Sept 2015). My conclusion was that Goode is genuine, and so I consider his June 15 ‘briefing” to be a very significant disclosure of recent events involving secret space programs that have transpired over the last few months.
Goode released a short update of recent events in bullet point form on May 14. In his June 15 briefing with me, he gave more details about this update, answered questions about what had occurred, and provided artist depictions of some of the events he was describing.
The May 14 update by Goode described an exodus of elite groups to South America and Antarctica:
Reports came in for approximately 6 months that high level syndicate groups were moving huge amounts of personal items and supplies to South American underground bases most noted in Brazil. More recent reports stated actual family members and high ranking syndicate members were pouring into these underground bases like ants before a storm.
Goode elaborated in his June 15 briefing that what the syndicate groups (global elites/Cabal/Illuminati) feared was huge solar storms predicted to hit the Earth. The so-called “solar killshot” long predicted by the remote viewer, Ed Dames, was imminent according to him in an interview on March 21, 2016.
The syndicate groups could not easily leave the Earth for refuge on off-planet locations due to a recent lockdown on airspace on and around Earth by what Goode describes as the “lower level SSP” comprising the National Reconnaissance Office (NRO), USAF Space Command, etc. The latter had deployed technology establishing an “Earth Defense Grid” coordinated from an “air (and space) traffic control” established on the Moon (Lunar Operations Command – LOC).
He said the LOC is currently controlled by the Interplanetary Corporate Conglomerate which is coordinating with the lower level SSP’s. The latter were instructed not to clear SSP Alliance flights into Earth’s air space.
The syndicate groups chose to flee instead to Antarctica/South America where underground locations provided some safety. The following graphic illustrates one of the six industrial areas under the Antarctic ice near the Ross Sea with parked spacecraft.The fumes coming out of the ground is from abundant thermal energy used as a power source. 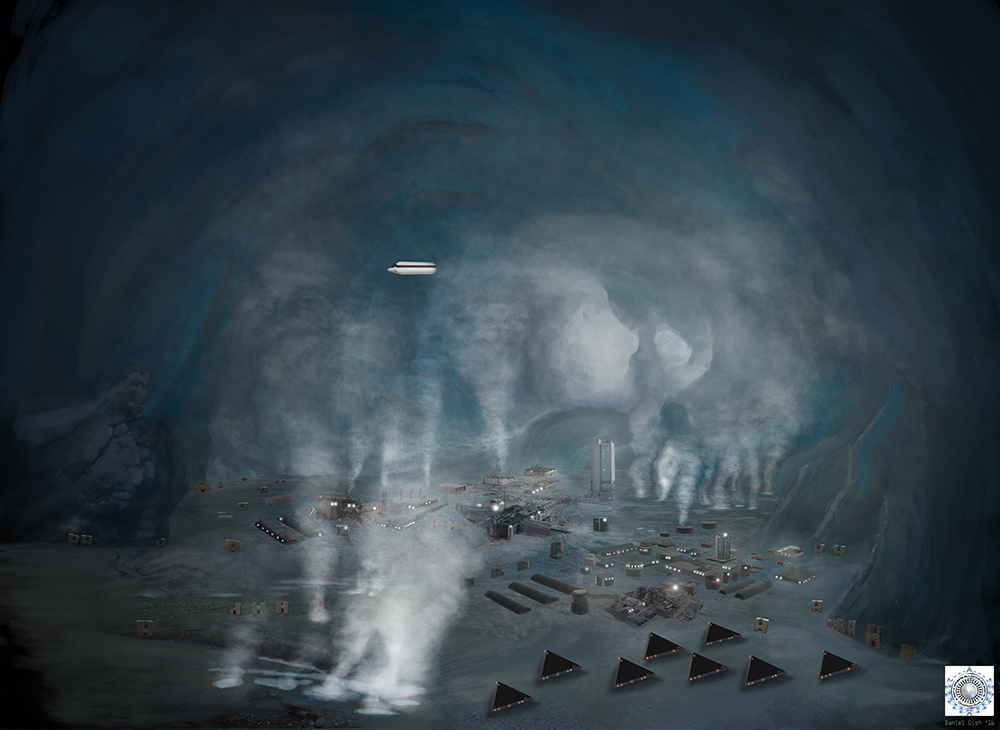 Coincidently, President Obama visited Bariloche, Argentina on March 24, which had become the unofficial headquarters of the “Fourth Reich” when Adolf Hitler fled there after World War II. The Nazi U-boat historian, Harry Cooper, found credible sources establishing Bariloche as Hitler’s refuge in his book, Hitler in Argentina.
In February 1960, President Eisenhower traveled to Bariloche where he negotiated the Joint Declaration of Bariloche with the Argentinian President concerning Peace and Freedom in the Americas. The real topic of negotiations, however, allegedly concerned deals which would further put the U.S. Military Industrial Complex firmly under the control of the Fourth Reich.
This alliance led to the emergence of the Interplanetary Corporate Conglomerate (ICC), one of the secret space programs revealed by Goode, which was now in charge of the Nazi bases in Antarctica. Therefore it is more than likely that President Obama’s visit to Bariloche, was to finalize new deals with the ICC/Nazis, which would facilitate their desire to move large number of people and cargo to safe locations in South America and Antarctica.
Goode’s May 14 update went on to describe huge submarines used to transport people and cargo to Antarctica as revealed to him by a “Lt. Col. Gonzales,” who has worked closely with Goode over the last year in secret negotiations and meetings involving different space programs and extraterrestrial alliances:
Gonzales later confirmed that these people and supplies were in many cases being transported to Antarctica via “Black Submarines” that were “EM Driven” and the “size of container ships”. The water filled subterranean rift systems are so incredibly enormous that they have no trouble on their journey. Furthermore, the reports stated that the rift caverns had been modified into massive arched tunnels in ancient times.
Goode supplied various artist depictions of one of the doorways into the vast water filled tunnel systems throughout South America and Antarctica used by the elites that extend all the way from Mexico, through South America, and down into Antarctica. 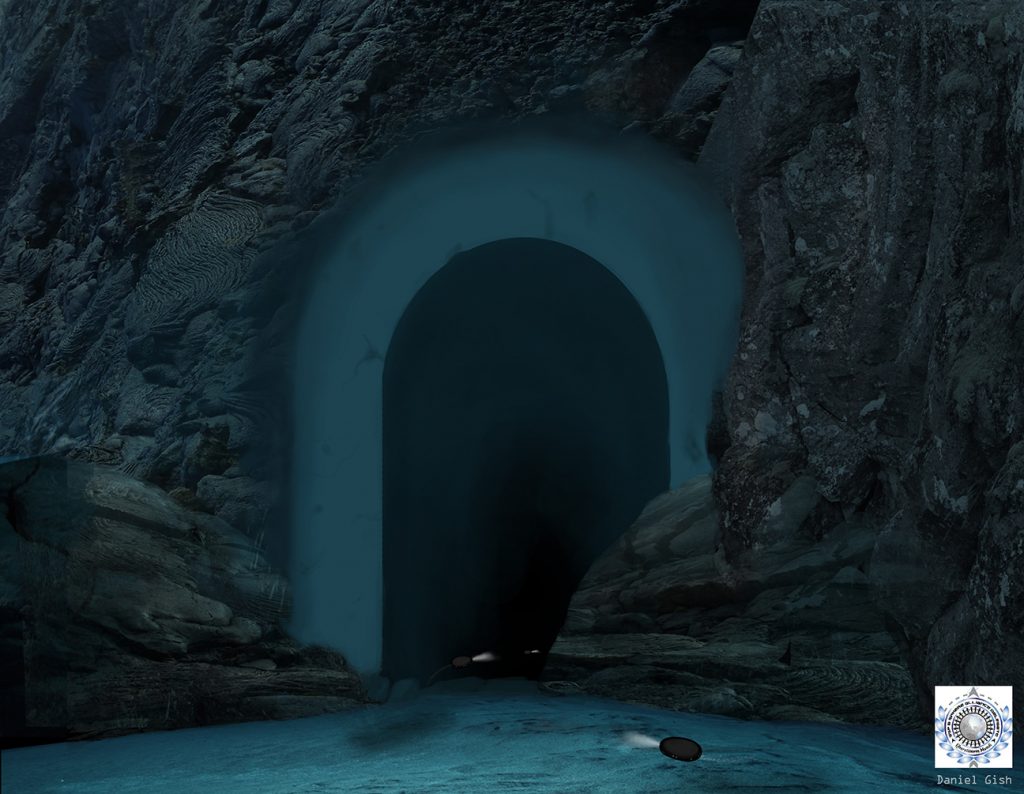 He said that there were six large industrial complexes located in the Western Antarctic region. The two largest complexes were city-sized and about two miles wide.
He provided an illustration for the location of these bases that he was personally taken to visit by the “Anshar” on May 14. Goode has previously described the Anshar as the oldest of the Inner Earth civilizations that he has met in secret negotiations – alleged dating as far back as 18 million years. 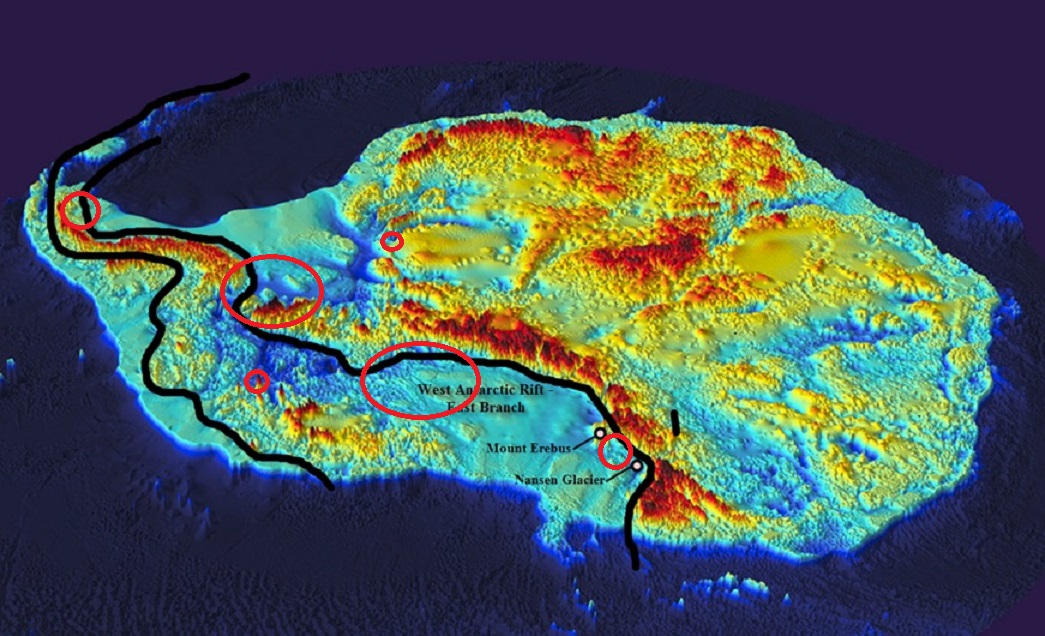 Further, he stated that he saw the secret Antarctic cities while traveling on an Anshar space craft that flew about 60 feet above the surface of the ocean directly into what looked like an Antarctic ice cliff, but which in reality was a hologram hiding the entrance to one of these cities. Goode saw large buildings, and two huge black submarines used to transport people and cargo to Antarctica being unloaded by giant cranes.
These large industrial complexes had first been established in the 1930’s by Nazi Germany, according to Goode, and subsequently expanded in the 1950’s and after agreements had been reached with the Eisenhower administration and the U.S. Military Industrial Complex. Currently, these six Antarctica bases are used by the Interplanetary Corporate Conglomerate, one of the secret space programs identified by Goode.
He then described in his May 14 update, a battle that had taken place over Antarctica:
One of the most interesting things that came out of this briefing [by Gonzales now safely located at a secret Kuiper Belt base] was that there had recently been reports of 6 large cruisers (teardrop shaped) were in the process of leaving the atmosphere after breaking the surface of the ocean near the coast of Antarctica. Dozens of “Unknown Chevron Craft” swarmed these cruisers and attacked the leading two craft causing massive and shocking damage. The cruisers broke off their attempts to leave orbit returning to below the surface of the ocean where they came from.
Goode has provided an illustration of the battle that took place. He told me that the teardrop shaped cruisers belonged to the syndicate groups who were aligned with the “Dark Fleet” – a space program first established in Antarctica by Nazi Germany/German Secret Societies – which later allied itself with the U.S. Military Industrial Complex. 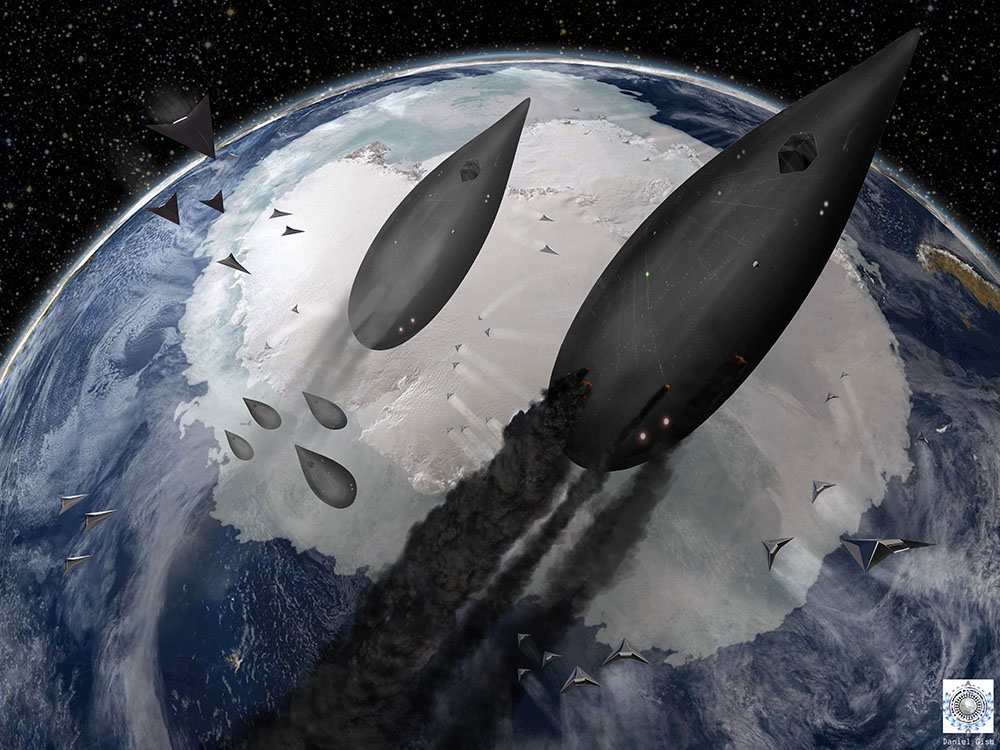 He added that the SSP Alliance were not sure who the chevron shaped spacecraft belonged to, but the speculation was that they were linked to the “Earth Alliance,” a consortium of “White Hats” from various national militaries working closely with the BRICS nations.
According to Goode, the Antarctic battle was not an isolated incident:
There has been a major uptick in conflicts just outside and within our atmosphere between craft of various groups that have involved the shoot down of a number of craft.
Gonzales reported dozens of underground/ocean conflicts that have involved the use of exotic weapons as well as an uptick in the use of weather modification weapons by both the various syndicates and elements of the Earth Alliance.
Events in Antarctica were being monitored closely by different nations and/or space programs. Goode described huge spherical craft over Antarctica that appeared to be conducting surveillance operations:
Reports came in for approximately 6 weeks detailing “huge spherical craft” in geostationary orbit above the continent of Antarctica. These reports came from 5 different sources and described the spheres as being huge, metallic, shiny with one row of portholes going around the sphere. One speculated that these craft were of Russian origin.
Goode then explained that the craft were operating over large areas of the Southern Hemisphere, including Australia. 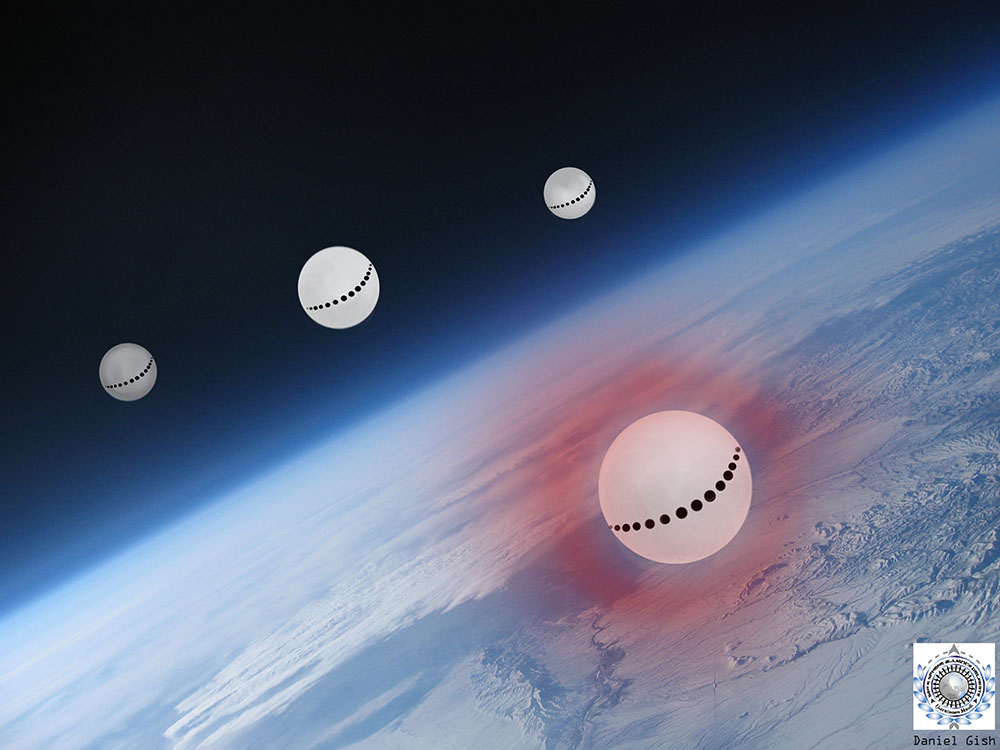 It’s possible that the craft are related to the “Cosmospheres” allegedly developed by the Soviet Union, which are described at length in the Peter Beter audio files. Beter was the General Counsel of the Export-Import Bank (1961-67), and had high level sources who confided to him what was happening behind the scenes in space up to the early 1980’s.
The Cosmospheres established Soviet weapons dominance in near Earth orbit, where they had military skirmishes with craft belonging to the USAF Space Command and NRO, which according to Goode, operate to about 400 miles above the Earth, and occasionally sent their most advanced craft to the Moon.
It is therefore very likely that the large spherical objects observing the Antarctic space battles were indeed Cosmospheres now under the control of President Putin and the Russian Federation. It is feasible that they provided intelligence used by the chevron shaped spacecraft that intercepted and turned back the larger teardrop shaped craft leaving with their likely global elite passengers.
Click here for Part II.
Special Note: I wish to thank Corey Goode and associated artists for kindly supplying the graphics illustrating his June 15 personal briefing.
[Update: 6/17/16. The article was revised to clarify that the Lunar Operations Center, under control of the ICCP, had denied clearance for SSP Alliance flights to Earth.]