Listen in as Michael Spinler recalls a possible past life as Jacob Schadenfreude as a Nazi in their super soldier program. Note: ‘schadenfreude’ is a German term for enjoying other peoples misfortune.From there Michael uncovers information about the Total Memory Recall Boot-Up System, Therian Operative Alpha 224, Base M-552,
and much more.

Special thanks to Jody Jody Hargreaves for his artwork contributions!

If you like to learn more about how meditation technology can assist you please visit:

James Rink and Neological Technologies does not necessarily vouch for the validity of any of the views expressed in this video and shall be held harmless by all third parties. Meditation and any information provided here is offered to treat for entertainment purposes only. Discernment is always required.

We start off at a psyche ward looking place it appears to be some hospital in Nuremberg 1945. Michael sees a man in a black trench coat with blacked out goggles and a Nazi helmet on his head. He grabs Michael and he goes down the hall. This appears to be one of his past lives, Michael is maybe 5 or 6 and he possibly goes by the name of (Y)Jacob Shaudenfreaud.

He’s told to put his uniform on and get back in line; he sees a row of children in front of him. They are all wearing a grey uniform with a hat that looks like something Stalin or a communist would wear. The hat also has a red band on it with gold trim and a gold bird on the front.

After putting on his uniform he is escorted to another room where children are fighting each other with sharp broom handles. One of the boys died while the others are forced to watch. 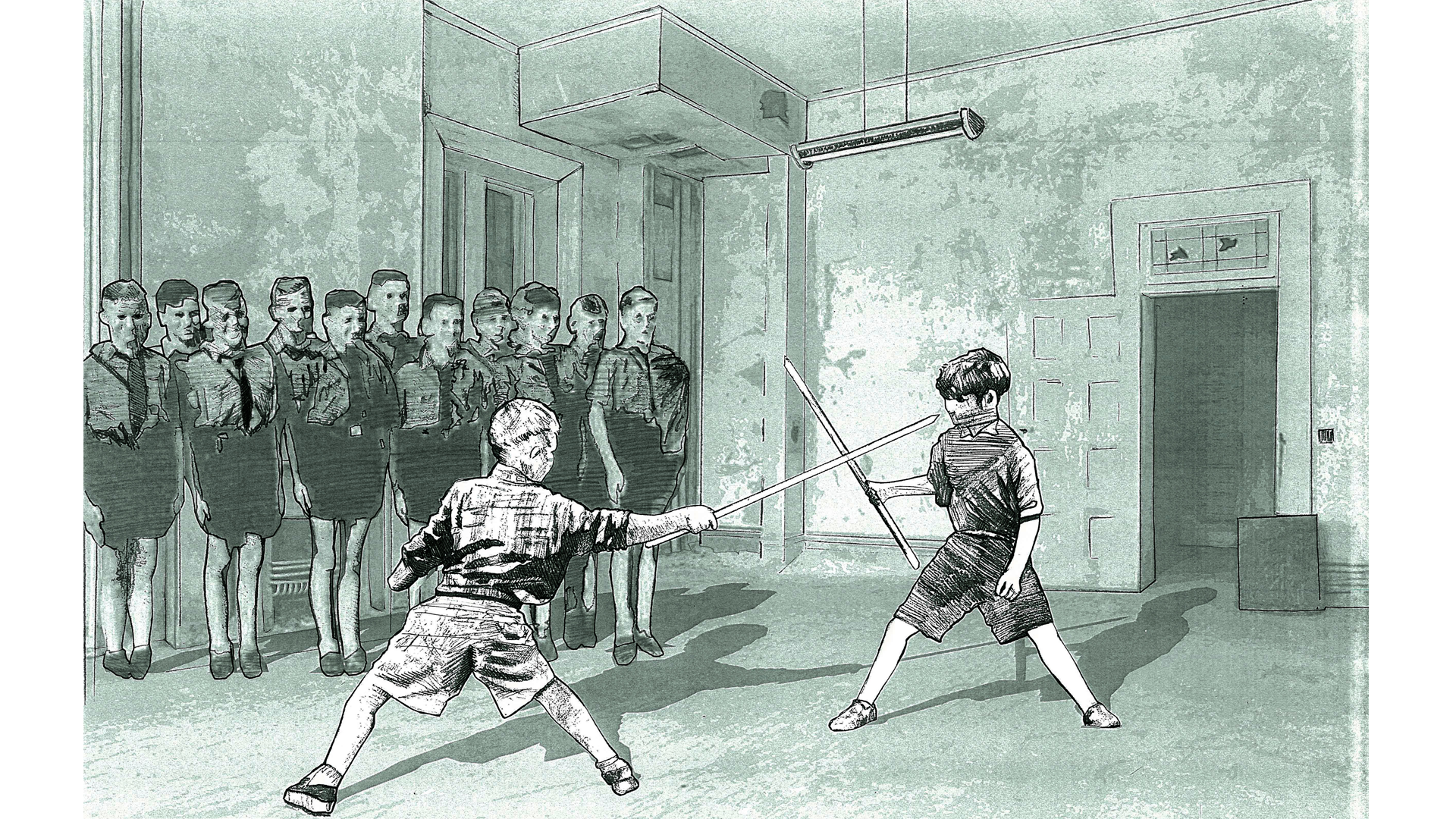 The dying boy had blue eyes and with his blood was pumping out of his neck stared at Michael and saw something that Michael had that the others didn’t. The other boys had blank eyes, no remorse but Michael saw the pain in his eyes.  An older man says “Your soldier spawns of the ss, you obey orders, you become the elite.”

In this same room they can also bring down a cage and force kids to each fight each other or fights with animals.  Such as Rottweiler’s fighting Dobermans, cats and dogs, pigs fighting each other; whatever they can find. At first Michael hated this but later on he loved it.

Now we go to second scene.

There are clone spirits talking to Michael. They show him their failed clone bodies rotting away, they lived in tanks in a coma all there life and are now dead talking to Michael in their spirit form.  Their life was short, less than a week because the scientists couldn’t figure out how to stabilize them in a womb environment. They would insert tubes and iv’s into the back of their neck and their bodies would float in a tube of glass. They are trying to solve the problem of them falling apart but the scientists didn’t care about the implication of their actions.

The clone spirits told Michael. “Don’t let them make you feel like a monster. You are only the monster they make you if you let them. They might look evil but true evil comes with many faces.” 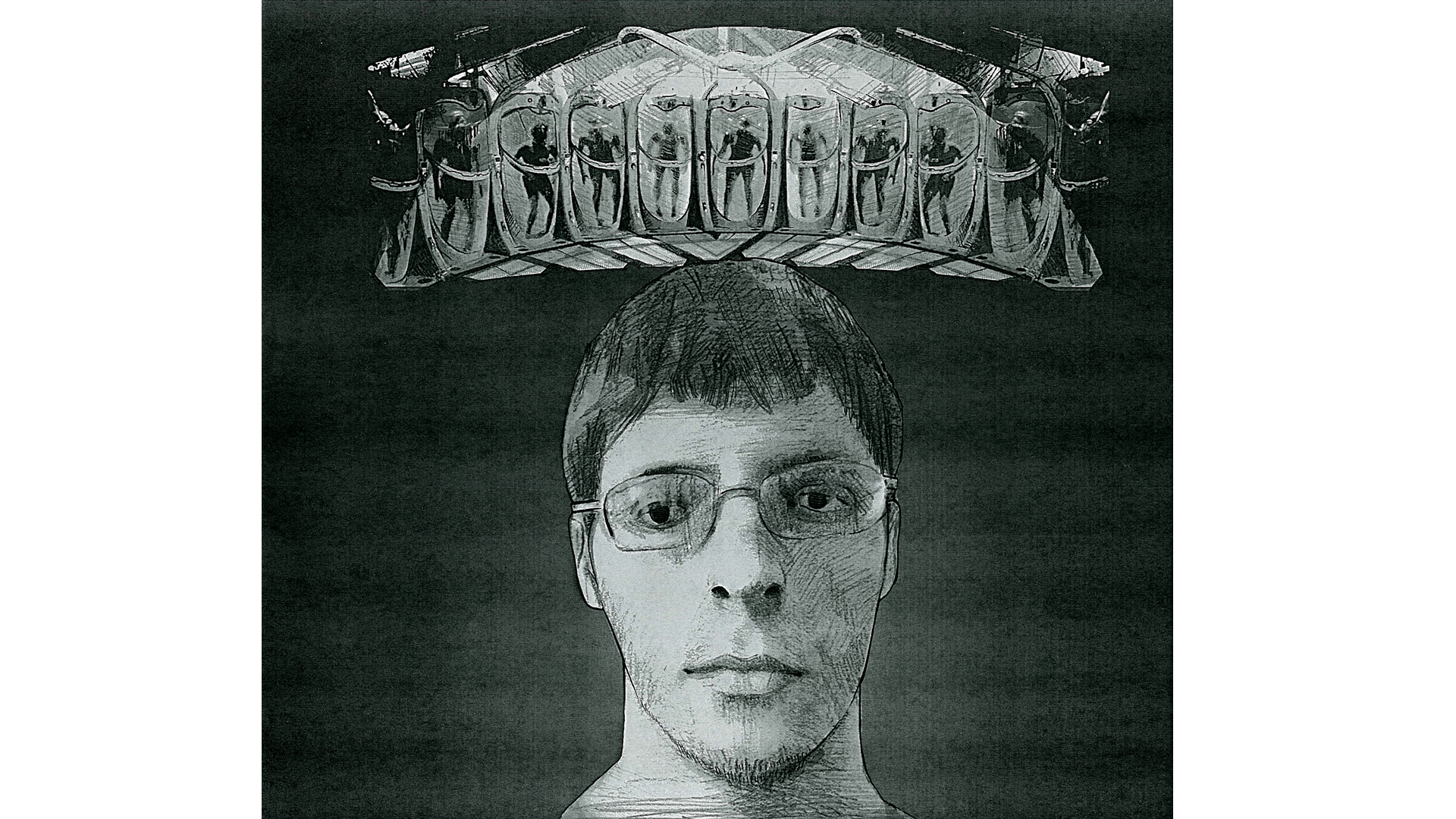 Now we go to another scene. He’s inside a room with two dentists like chairs, black with brushed silver trim. Outside the room in the hallway two greys pass by. These chairs are known as the total memory recall boot up system. Near where the head would go was a bunch of gear which looked like a giant apparatus. Between the two chairs is a box with vials of different colors. They would place clones into these chairs and inject them with different chemicals which would insert memories into the implant in the back of their neck.

Apparently Michael sees some of Aaron McCollum’s clones, one had white t shirt with black pants and black combat boots, the other was wearing an army green colored shirt with khaki pants and brown boots. They are telepathically instructed to both lay back with their arms secured into a groove. A needle goes into their neck.  On the computer screen a red colored battery icon flashes and it says loading. A red vial begins to pumps a drug into them. 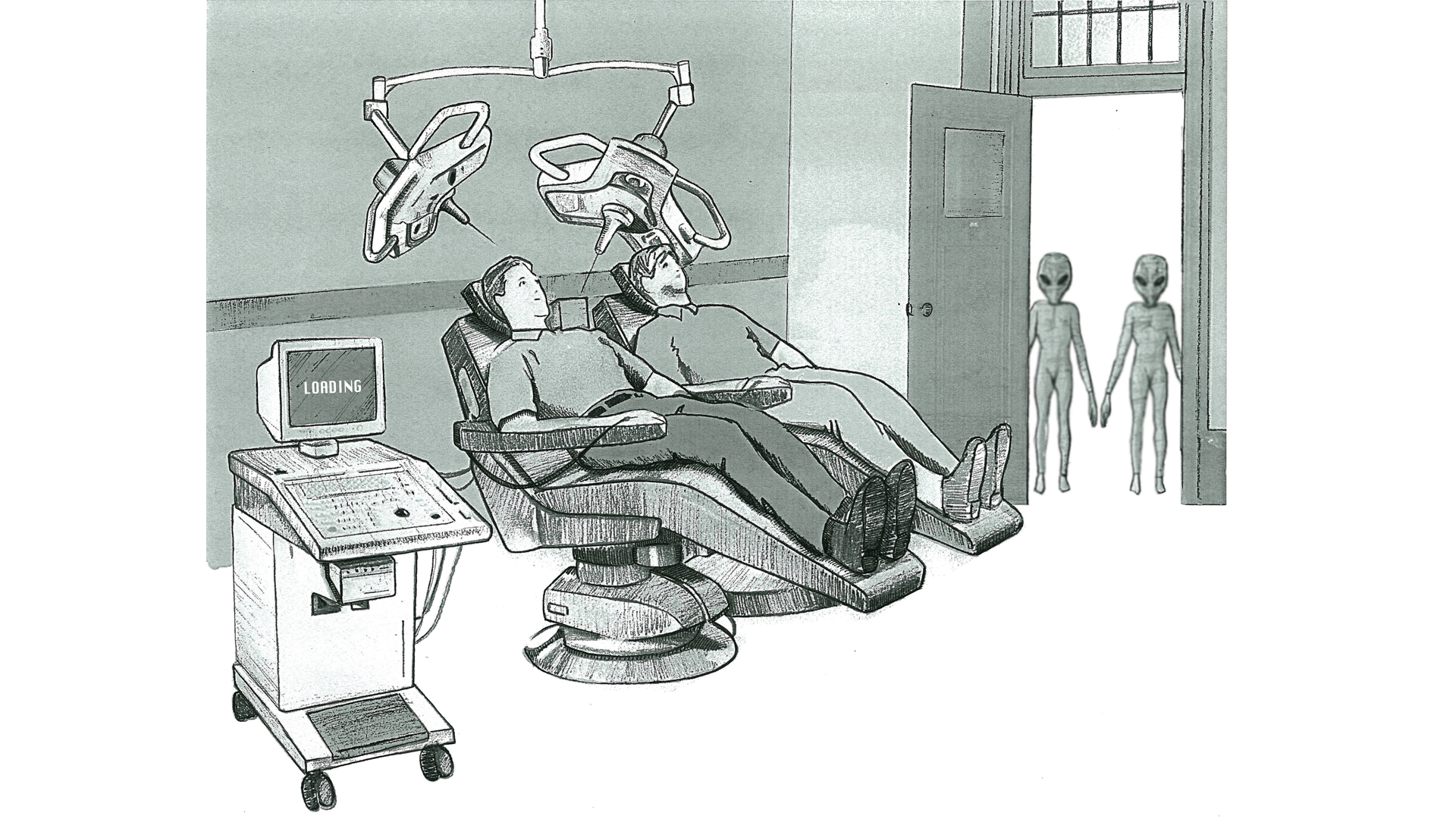 Both of their eyes where closed but suddenly in perfect synchronization both open their eyes at same time. They are now connected into some kind of hive mind; they are programmed with the same motives but with slightly different memories. One got combat training, the other didn’t; but they both know something for same job but do different tasks. After their injections were complete they are led to a tank and placed into stasis. It’s not exactly like freezing. It’s a silver blue like bed that freezes over and when they need them they simply thaw their bodies out like nothing happened.

So now I have Michael travel to a time when he was in the total recall memory boot up chair. This machine can wipe out memories and they can pick and choose memories they want you to know or don’t know. He sees an avatar body of himself siting in this chair. He’s wearing a grey military crew top shirt, black acu pants, black combat boots, and everything blacks out. He then sees a blue color then a schematic inside a computer. He’s being programed for different muscle signals for combat situations, training, and experience which are then bounced from one person to another. He sees someone in the other chair but he doesn’t know who he is, but he has an English accent.

Michael pulls up files about himself. He found out what they killed his mother. They hit his mother with microwaves and paid off doctors not to help her. This played into his persona of the black bird, like the crow, Michael is an assassin. You can’t trick a crow!

He then has a flashback. He then remembers when he was 12 years old being taken to the woods near a red barn in Michigan to some kind of training facility for boys. He was taken here every autumn to be trained. About 50 boys were taken and 5 or so died each year. It made him feel superior to watch them die, because he survived.

He thinks it might be Base M-552 where the letter “M” stands for Michigan. There is a sister facility known as Q-552 which is probably in Québec. There is a system to get from one base to the other base in an hour or so. The personnel all have wear the same badges but with different colors.

Michael then pulls up data about the group he possibly works for. This group wears a uniform with a circle and triangle inside it. They are known as the Therians. They are at war with the illuminated ones. They are actively forcing them out of power and taking control over their secret facilities. 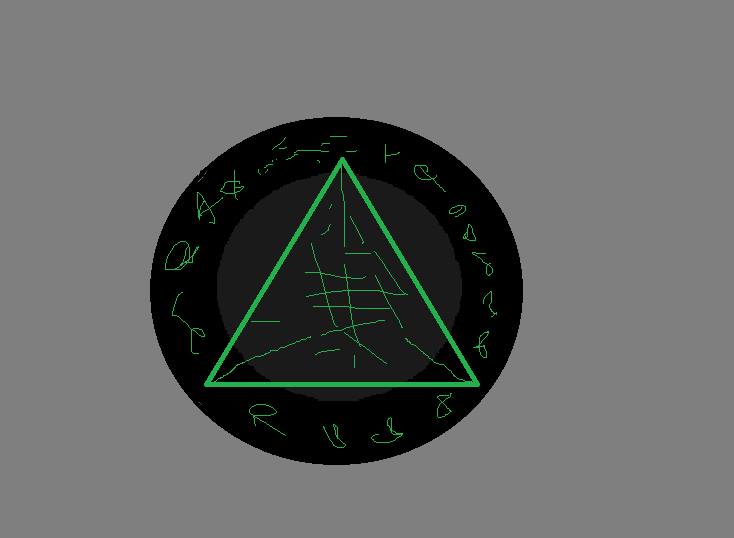 His profile reads….. Therian Operative Alpha 224, he can’t find any other stats. It’s all encoded, they don’t want him in. So I plug into the computer and he uses my codes.

Now he sees some stats……

He sees his uniform it’s a black skin tight uniform, looks like a wet suit. It enhances your abilities. They refer to it as a nano cybernetic suit. US Military is trying to get ahold of these suits, no luck so far but they got cheap knock offs and use it for invisibility.

He then sees a flashback where he is taken on a ride in a white van with no markings. After he is activated he can either get up and walk out the door to be picked up or walk through solid objects and teleport inside the van. The van then rendezvous to a launch point to travel to mars.

On mars he appears to be standing on solid stone with a light covering of dust. The sky is much bluer then the pictures from NASA show. He’s wearing a sand colored suit with a glass mask. It’s very bulky and hard to manage; but it increases his mass and controls his muscles so it’s easier to move with low gravity. The weapon he carried looked blocky, and fired some strange type of ammunition. It looked like a clear pink light that caused the target to implode then explode. His weapons where always better than the illuminati weapons.

There was a battle, the Therians killed 30 people and the illuminati super soldiers killed 12 Therians. These were probably all cloned avatars bodies. Some of the NASA earth rovers have taken pictures of these men in their suits; but they play it off as if they don’t exist. 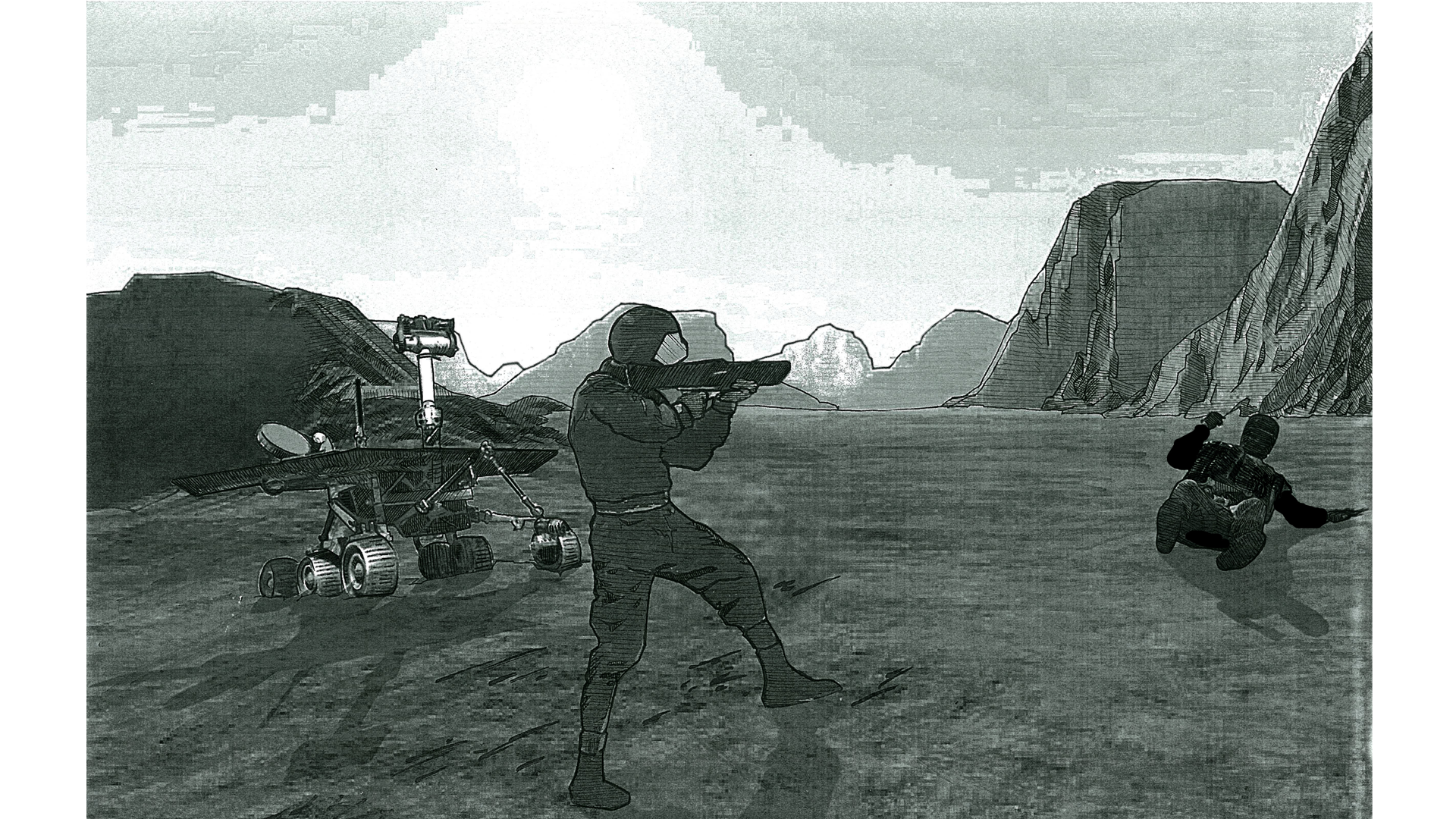 So then he looks up my file……

Then finds it’s a joke on Captain James T. Kirk

He can’t get any more info, claims it would trigger me and I become unstoppable force. But he did inform me all my answers can be found at Jackson, which I assume is the Nazi milab facility on mars where I was probably created.