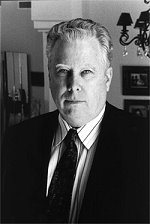 The story of artificial telepathy research in the 1980s and 1990s centers on The Aviary and their leader, Col. John B. Alexander (see photo).

“The Aviary” is a collection of strange birds: a group of key scientists, military men and intelligence agents who share an intense interest in UFOs, telepathy, remote viewing, parapsychology, mind control and the creation of psychotronic weapons.

They seem to work and flock together, and they are reportedly part of a secretive cell. Its members are codenamed after birds, hence they are called “the Birds” and their cell is called the “Aviary.”

The strange UFO slant on this group appears to be simple disinformation.

A well-designed program to torture civilians requires plausible deniability and a built-in means or method to discredit the victims. Certainly people who hear voices or run to the police complaining of an “alien abduction” are instantly discredited. Hence the UFO debate: are alien abductions real, or just some kind of psywar cover for nefarious deeds by “men in black”?

According to the Doc Hambone site
http://www.mindcontrolforums.com/hambone/people.html
there is still a great deal of uncertainty over who belongs to the Aviary, and what their codenames really are:

“The individuals involved expanded to include almost anyone that supports or debunks UFO research that is in any way connected to the government. Michael Persinger has been included, as well as Susan Blackmore for interviewing him. It has degenerated to the point that it’s now an inside joke on the newsgroups, with people giving each other codenames like Pigeon and Dodo Bird.”

The Aviary in Order of Codename:

The Aviary in order of real name:

The following are short profiles of the reported members of The Aviary.

John Alexander (PENGUIN), Ph.D. in Thanatology [Death Sciences], Col. (“Ret.”), U.S. Army Intelligence and Security Command (INSCOM), which is undoubtedly his military cover for the National Security Agency (NSA). He is a former Green Beret, and completed his Ph.D. thesis under the supervision of Elizabeth Kubler-Ross, an expert in “out of body” experiences during near-death trauma.

In December 1980, Colonel Alexander published an article in the US Army’s journal, Military Review, “The New Mental Battlefield”, stating that telepathy could be used to interfere with the brain’s electrical activity. This caught the attention of senior Army generals who encouraged him to pursue what they termed “soft option kill” technologies. After retiring from the Army in 1988, Alexander joined the Los Alamos National Laboratories (LANL) and began working with Janet Morris, the Research Director of the US Global Strategy Council (USGSC), chaired by Dr Ray Cline, former Deputy Director of the CIA.

As director of the Non-Lethal (sic) Weapons Department at LANL, Alexander has been reportedly involved in counter-intelligence remote-viewing, psychic-warfare, psychotronic and mind-control projects with military/security applications, while maintaining the cover of nonlethal military/crowd control physical-countermeasures research.

Along with INSCOM General Al Stubblebine and INSCOM Major Ed Dames, Dr. Alexander has been serving as a Board Member of PSI-Tech Corporation, involved in proprietary remote-viewing projects for hire.

According to the National Institute of Discovery Science (NIDS), a Department of Defense funded think tank which explores so-called fringe science and psychology, Dr. John B. Alexander serves as a “Discreet Project Scout.”

NIDS states: “Dr. Alexander, a staff member of the National Institute of Discovery Science, provides interface with Science Advisory Board Members. He joined NIDS when it was formed in 1995 shortly after retiring (a second time) from the University of California. . . . Dr. Alexander was chairman of the first three major US conferences on non-lethal weapons. His work has brought him international recognition and he has been a US delegate to three NATO studies on advanced weapons. He has written many articles on a wide variety of topics and co-authored The Warrior’s Edge. ”

The Penguin also serves on the adjunct faculty of the California Institute for Human Sciences. http://www.cihs.edu/

Rumor has it that Alexander is head of the Aviary, and that the Aviary is headquartered at Los Alamos.

See Also: The Three Faces of the Penguin http://www.konformist.com/1998/penguin/penguin.htm

Chart regarding the many connections of John B. Alexander:
http://www.namebase.org/cgi-bin/nb06?_ALEXANDER_JOHN_B%20%28COL%29

For many more sources, try searching on the string “Alexander, John B.” at Namebase:
http://www.namebase.org/n2search.html

Dr. Christopher C. “Kit” Green (BLUEJAY), MD, Ph.D., Chief, Biomedical Sciences Department, General Motors; former custodian of the CIA’s UFO files at the “Weird Desk”; received the National Intelligence Medal for his work on a classified project during the period of 1979-1983; recently reported to be White House UFO liaison. Dr. Green has admitted that the CIA has compiled over 30,000 files on UFOs, 200 of which are extremely interesting. Green was a key CIA member in examining the UFO problem for several years: a former Scientific Advisor on the Advisory Board to the Directorate of Intelligence, CIA. He apparently has interests that extend into remote viewing, neurophysiology, and other highly interesting areas. Known for his stony silence.

Ernie Kellerstraus (HAWK), security-cleared for UFO information, worked at Wright-Patterson AFB in the 1970’s, and is reported to have lived with a Star Visitor for a while; reported to have worked with Dale Graff (*HARRIER*?) and Captain Bob Collins (CONDOR), Air Force Intelligence, to supply UFO information to widely-suspected disinformation operative and self-styled ufologist William Moore.

Ronald Pandolfi (PELICAN), CIA Deputy Director for the Division of Science and Technology, and current custodian of UFO files at the “Weird Desk”; involved in the White House Initiative, as UFO liaison, to expedite (at Laurence Rockefeller’s behest) the release of UFO information to the public; and has been quietly leaking UFO information the past few years.

Dr. Jack Vorona (RAVEN) one of the initiators of the DIA’s Sleeping Beauty project which aimed to achieve battlefield superiority using mind-altering electromagnetic weaponry; Appears to be a kingpin in The Aviary, and a Washington insiders’ guessing game has sprung up, as devotees of UFO intelligence data argue for the probable identity of their favorite “candidate”. [Possible candidates: Henry Kissinger, Ph.D., Edward Teller, Ph.D.; General Brent Scowcroft.]