The gnostic illuminati was right, we really are dealing with a rogue AI

As the old adage goes, truth is stranger than fiction. It turns out the gnostic Illuminati (GI) were right, we really are dealing with a rogue AI that controls the Khazarian mafia. Humanity must defeat this AI or become slave-robots working eternally to serve a machine mind.

When the GI first contacted the White Dragon Society to warn of the AI, we were skeptical. Then, we contacted one of the original members of the top-secret MJ12 group set up by President Dwight Eisenhower to study “aliens.” He told me his group had come to the same conclusion.

Now we are getting dramatic new evidence showing this is the case. As we reported recently, the White Hats thought they scored a major victory by apprehending Davos World Economic Forum (WEF) head Klaus Schwab, and EU Central Bank Head Christine Lagarde in Antarctica.

Well, Schwab has been apparently replaced by an AI. Now, this week the WEF will be holding a “virtual Davos” where they brag “The global COVID-19 crisis has acted as a worldwide accelerator for the rollout of artificial intelligence (AI) initiatives.”

The WEF also promises that key organizations including WHO, IMF and the World Bank are working together in order to provide extra financial support to the WHO and its COVAX partners for “providing all countries with equal access to vaccination.”

Now Russia’s FSB has determined what is in a large portion of these vaccinations the WEF wants to impose on humanity: nanobots allowing remote control of humans by an AI. This new concept proposes using neural nanobots to connect to the human brain’s neocortex – the newest, smartest, ‘conscious’ part of the brain – to the ‘synthetic neocortex’ in the cloud. The nanobots would then provide direct, real-time monitoring and control of signals to and from brain cells.

Our CIA sources say the person appearing as Fauci on TV screens is definitely an AI avatar because the real Fauci was executed. They also forwarded this to us:

The entity masquerading as the [Biden] administration’s surgeon general, Vivek Murthy, is not a man but computer-generated imagery (CGI) superimposed on a dynamic algorithm that pushes a fictitious Covid narrative from some hidden crevice in Washington, D.C., said Lt. David Hoffer, a program analyst at U.S. Army Cyber Command Headquarters at Fort Gordon.

A massive counter-attack against this AI and its brainwashed human servants is now underway, according to Asian Secret Society, CIA, MI6, NSA and FSB sources. This is being seen in a lot of seemingly unconnected, but dramatic, events around the world ranging from Antarctica and the South Pacific to the North of Norway.

For example, the Haarp array in Norway that was causing the La Palma volcano in the Atlantic to erupt was

The remainder of this Article or Video is only available to members of BenjaminFulford.net holding the respective level of subscription. If you are trying to view the Friday Video and are logged in, please make sure you hold the correct subscription level.

taken out by British special forces, according to MI6.

As a result of this attack, the La Palma volcano in the Atlantic has stopped erupting. This means the East Coast of the United States is no longer being threatened with a 100-meter tsunami.

The removal of this threat has now finally allowed the white hat military to take direct action against the Khazarian mafia and related AI servants inside the United States.

This caused the AI posing as US presidential spokesperson Jen Psaki to malfunction (As background, David Rockefeller grandson Mark Zuckerberg had been playing the Psaki role until he/she caught Covid and disappeared for 12 days before being replaced by an AI avatar). In any case, the malfunctioning Psaki AI issued the following threats last week:

“We are Looking at efforts across the country for ways to STOP PEOPLE from exercising their FUNDAMENTAL rights…MORE THAN 13,000 NATIONAL GUARDS HAVE BEEN ACTIVATED IN 48 STATES TO SUPPORT VACCINATIONS….”

What is really happening is the AI is trying to use mind-controlled troops to fight the United States militia who have been activated in 43 states and are moving in on Washington DC.

This news item reflects the ongoing battle to free the US:

The removal of, most likely blackmailed and compromised, Prince Andrew as the head of the US and British Navies has been a key event allowing the counter-attack to unfold, MI6 and NSA sources say.

The new head of the Navy explained:

“Britain is run by the Admiralty, it is a naval intelligence country. We cannot have a member of the naval community implicated.” In addition, he said, the official admiralty stance is as follows:

“No laboratories around the world have proven the existence of Covid 19 which means the worlds’ civilian governments have been in high treason for two years. They are now attempting to beat a retreat. The head of the fourth Reich George Bush was executed so the fourth Reich is fighting back.”

Other sources agree the battle is raging. For example, NSA sources say “US Naval HQ shaped like a swastika were flooded and connections to NAZIs destroyed.” According to CIA sources in the south Pacific region: “This was a destruction of a massive DUMB with tunnels going in every direction. Notice that a big earthquake occurred in the Sunda Strait, Indonesia as well around the same time. Another DUMB was destroyed.”

“Tonga has some Chinese-owned tunnels and deep submarine access. Thanks to the deep waters that surround the shallow coral shoreline. They have been destroyed.”

We were also able to contact a senior Russian FSB source about the situation in Ukraine who said “We do not want to rule Ukraine, we just want to remove the fascists installed by UN agents like Victoria Nuland.”

The FSB and Russians view the UN as their real enemy and the fake Biden administration as UN proxies, according to the source.

“Russia is trying to rebuild the USSR. The UN is trying to put military all around Russia and support color revolutions. However, when the UN tries to destabilize they are not doing anything new, they have been repeating the same thing for 20 or 25 years so now we know how to stop them.”

“Russia is perfectly entitled to seize Ukraine by law. Ukraine is nothing more than a money-laundering operation so if Russia goes into Ukraine then god bless them,” MI6 sources say.

The removal of Prince Andrew opened naval intelligence files showing there were 16 biochemical warfare plants being run by the Nazis in Ukraine. The Nazis were also actively assassinating all political opponents in Ukraine, CIA sources note. 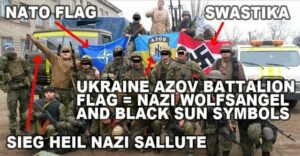 It is now payback time. On Friday evening, a Russian nuclear Submarine surfaced off the coast of Norfolk, VA. The sub has 16 Bulava Missiles, each equipped with ten independent nuclear warheads. At the same time, Russia sent amphibious assault ships Sweden’s coast.

The FSB source says a deal has been reached with the US and Chinese military to take on the real source of the problem -which they think is the UN. “The entire idea of the UN is outdated. It is not a unity of countries. It is pushing the rules of only one country,” the source notes.

The “one country” the source refers to is not the United States but rather the AI-led group now holding their virtual Davos summit.

In any case, more and more humans are backing away from the vaccine agenda. It’s all coming out now. The US military’s DARPA program released bombshell evidence the vaccine and fake pandemic was “Premeditated Manslaughter of Millions of People Coordinated at the Highest Levels” 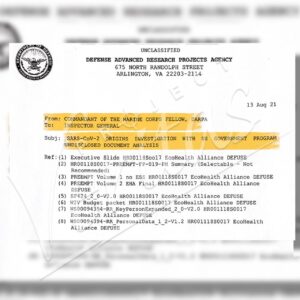 Here is the entire DARPA PDF file for the readers who want to do their own study.

Darpa is not alone. As a CIA source notes “Hackers broke into all of the pharmaceutical companies and stole all the medical data on vaccines, thank God! The Great Awaking has lifted off! Forward this link everywhere.”

Among other things, the hack revealed that some vaccine batches were 50 times more deadly than others. This supports the idea that insiders were given placebos or safe vaccines while “undesirables” were being deliberately poisoned.

This sort of evidence is more than enough to justify military intervention to remove corrupted civilian governments and the UN.

An NSA source agrees and says public Nuremberg-style tribunals will begin in April. Of course, other sources say the trials have been going on for some time.

We also note the reappearance of Donald Trump who is no longer pushing vaccines. “We’re done with the mandates. … The mandates are a disaster for a country,” he said, arguing vaccine requirements are “just absolutely decimating our economy.” The Trump who is appearing at rallies in the US is actually his double (the one with white around the eyes and a double chin), NSA sources say. However, he is authorized by the real Trump to speak on his behalf, the sources say. The real Trump is at the Thule airbase preparing for the upcoming military campaign to liberate the United States, the sources added. Asian secret society, MI6, and other sources say they support this Trump.

The liberation of the US will then trigger the fall of the UN etc. multiple sources agree

Here is what a space force commander had to say about the overall situation:

There is a complete system collapse. It has already begun. Afterward, some people will try to go on with their lives but life won’t be the same any longer.

Everything will change. Courts, schools, banking, etc. The N. Korea missile strike, Russia war invasion, CCP invasion of Taiwan; all of this is a show.

We also are not under the control of the British monarchy any longer. The Rothschild, Rockefellers, Illuminati Pyramid, Bush and Clinton Dynasties are all dissolved. The Covid 19 Scamdemic is unwinding very fast now. Watch Fauci, as this is the key.

Comments are only available for readers with an active subscription. Please subscribe to view comments.