We received this letter yesterday from an anonymous source via US mail.  Before It’s News is just a conduit for your news and we thought this information might be of value to our readers.  Here is the fulltext of this letter, from people who claim to have worked on the design and contruction of the new MetLife Stadium (original jpeg scans of the letter are below the text).  The upside down American flag stamp on the outside of the envelope is an interesting touch. Video report also below.

The Treason Bowl February 2, 2014 at the Meadowlands Sports Complex

For reasons soon to be obvious to you, I will not introduce myself, nor any of the others who have contributed to this notification. We have been involved with the construction and operation of the new MetLife Stadium at the Meadowlands Sports Complex. Some of our involvement precedes the groundbreaking, and some of our involvement is current.

From here on, I will refer to the upcoming Super Bowl as the “Treason Bowl”.

From the start, from design stages, plans have been made for the stadium, and the American Dream Meadowlands complex, to host a well-planned false flag event, so grand that one would think it was planned in the offices of Josef Goebbles himself. This has been in the works for at least six years.

The highlight of this treason will be the world-wide live television coverage of this abomination of civilization. This promotion of fear and horror is hoped to inspire the masses of the world to willfully submit to the eradication of rights given to us by God.

In the very design of the stadium, spots were planned for the placement of bombs, not to immediately kill the stadium guests, but to entrap the guests. The bomb placements are for the creation of choke points to control the movement of the guests.

Remember, the highlight is the international live broadcast of desperate human suffering. It will first be answered by military-ized police and thug-like New Jersey state police, but to ONLY be resolved by US Army troops from Ft. Dix.

The fix is in; racketeering at its finest hour.

You may notice that the New Jersey State Police Sports Complex Unit has a noticeable high percentage of troopers that are very big, look like thugs, and we assure you – act like thugs. Seven of us have witnessed experiences with them, with varying degrees of rudeness, misery and disgust. There are traitors within this local state police force who will be enabling the apparent foreigners, in the stadium and in the whole complex. It has been harder for us to be exact with numbers of US federal agents in on the false flag fix, but we have confirmed they to be from DHS, NSA, FBI and Blackwater.

For the Treason Bowl, there may be as many as 11 armed “foreign terrorists” in the stadium itself, being another 8 of them in the rest of the complex, including Meadowlands Station.

A heavier-than-air poison gas will be brought in with the C02 canisters that are used by soft drink vendors. It will not be a quick killer as chlorine gas, but rather a gas that causes more physical contortions and suffering, for high-impact live video. This heavier-than-air poison will first target the field level, most notably the athletes on the field. Specific placement of bombs will insure that no one leaves the field level, ala the closed choke points.

False flag Islamic demands will be posted for the release of “freedom fighters” in Guantanamo, but primarily for the exit of U.S. forces from Afghanistan.

For those of you who haven’t figured it out yet, about the extensively drawn out Afghan occupation by a supposedly mighty military (with untold hundreds of billions of dollars worth of military resources AND high-tech intelligence resources), against an out- manned (and out-gunned) rebel alliance with a mysterious decade-plus bottomless supply of resources -> it’s all about the three pipelines – the now-complete Caspian Sea oil and natural gas pipelines to China and points in between, and the heroin pipeline to developed countries in the west, especially our country. The continuing vagueness of the Afghan occupation should be as obvious as the nose on your face, and should consume your curiosity. The lot of us here are amazed how this realization escapes the most of you. Of course our senses are heightened on this matter, having learned for the past 6 years of the pending evil and doom of the 2014 Treason Bowl.

There were scattered warnings before the successful treasonous coup de tat of Sept 11. The warnings were not heeded, mostly because such a display of treason wasn’t so believable at the time, as much as it is believable now. After that event, those previous warnings were given the status as if they came from the Bellevue nut ward, even though the event itself showed the warnings to be very accurate.

An aside here: one of us has a relative who was one of the many NYFD officers who heard the meticulous floor-by-floor demolition explosives in the World Trade Towers.

The obvious, but never to be explained, breakdown of the tax-payer-financed multi- hundred-billion-dollar-a-year U.S intelligence community is well underway, again.

You must recognize that treasonous orchestrations of such grand scale can only be accomplished with the bottomless pockets of intel agencies, with secrecy as their ally.

Rest assured that “treason” is the correct word for the event. The former military explosives experts of contractor Blackwater will be placing the bombs.

We’re told that the FBI is complete with the fabrication of evidence.

(This reminds me of the NY State Trooper C evidence-fabricating scandal. This time it’s federal, with NJ state police help, and much bigger targets.)

DHS gumshoes have covertly infested the operations of the whole complex, supplying reports as to the progress of the logistics of this fabulous false flag murder fest, and hoping to identify any Meadowlands Complex workers who may be getting savvy to the treasonous ploy of federal agencies, and subversive NJ state police.

Specific state police officers are tasked to enable the alleged “terrorists” to their assigned placement for the horrendous and sinister festivities in the first half of the third quarter, when this conspiracy theory will no longer be a theory.

DHS appears to be the overall planners and coordinators, while drawing upon the resources of other federal groups, especially the NSA. The NSA seems to have the planned psychological blueprint for the multiple-day death, horror and hostage event. Psychological operations have been part of their original mission since 1952, to counter the brainwashing of Korean War captives. NSA has always done psycho activities, and blamed the CIA for most of it.

Our hope here is that the Treason Bowl could be abated per this warning. Much depends on high-visibility circulation of this warning. Just the same, you may want to cheer for your favorite team to lose in the conference finals, in triple overtime of course. 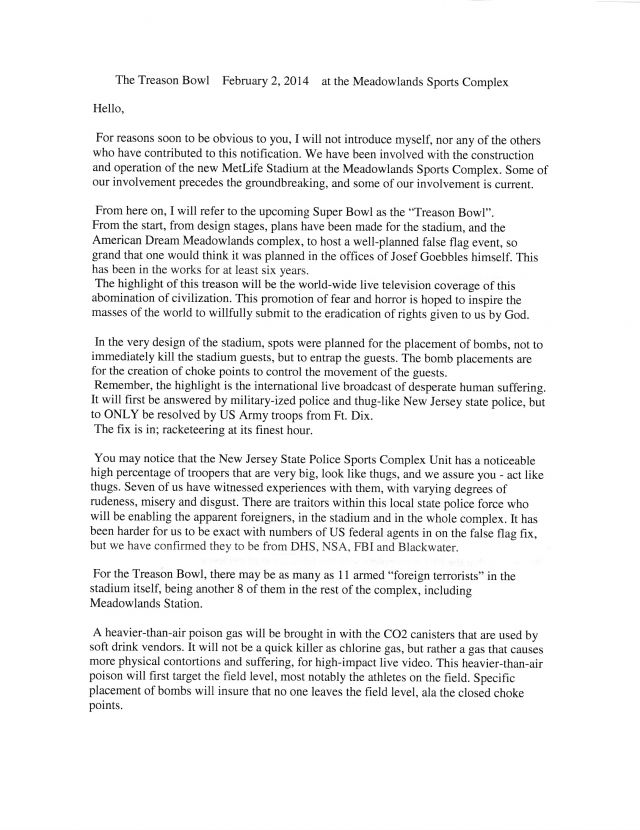 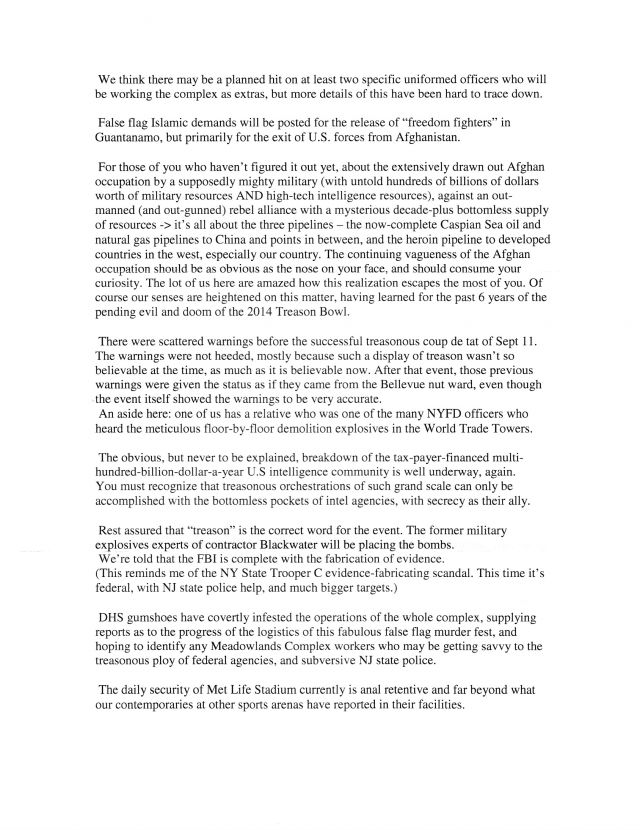 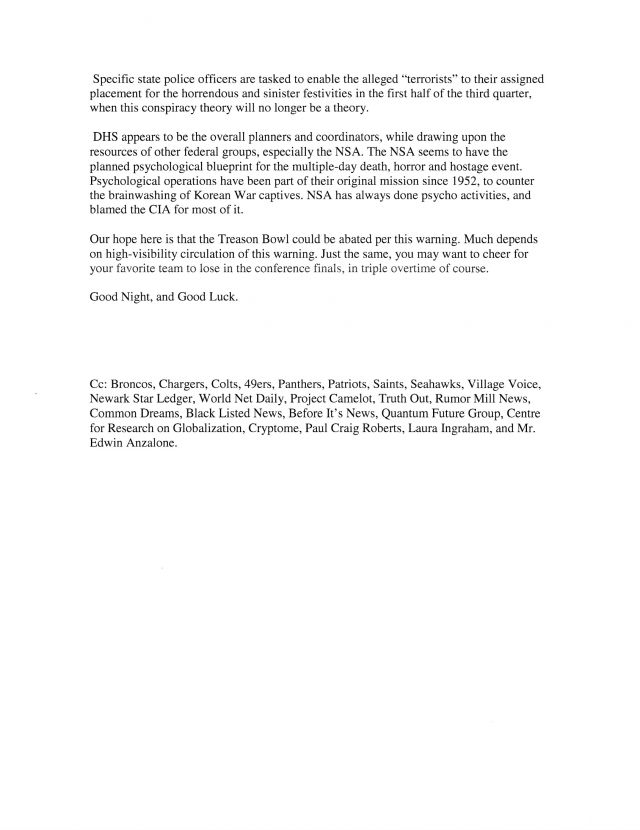 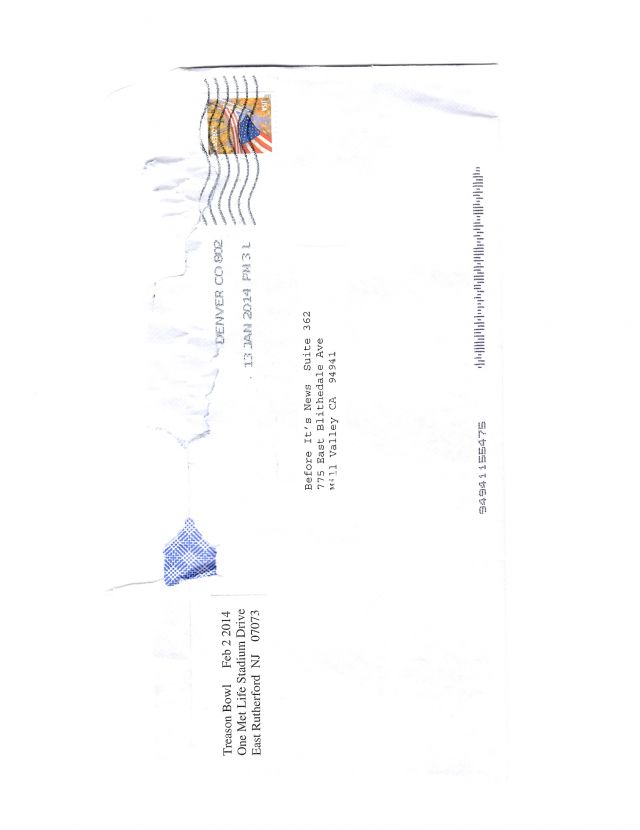