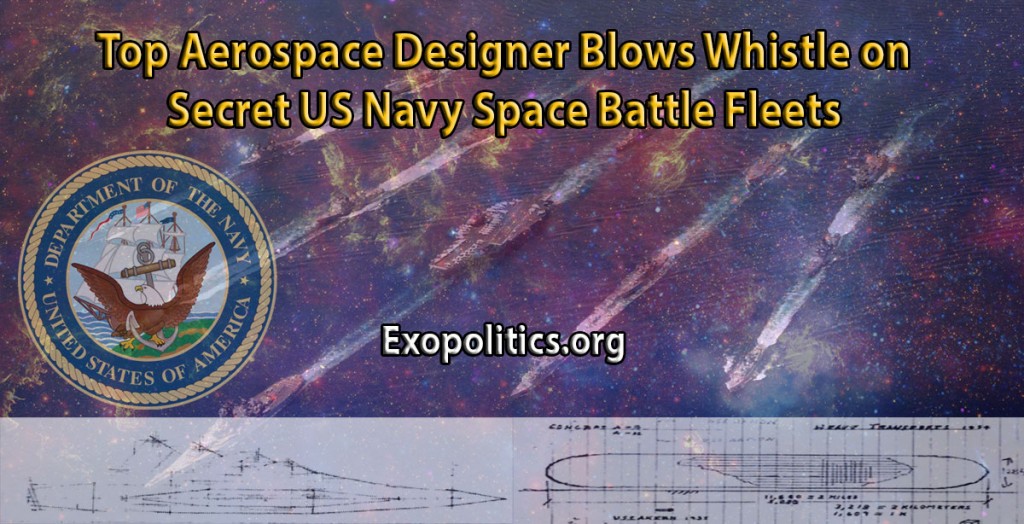 Over a 12 year period beginning in 1951, William Tompkins worked for an above Top Secret think tank within the Douglas Aircraft Company designing kilometer-long antigravity spacecraft covertly requested by the U.S. Navy. Now aged 92, Tompkins becomes an important whistleblower by exposing the secret projects he worked on in his newly released autobiography, Selected by Extraterrestrials: My life in the top secret world of UFOs, think-tanks and Nordic secretaries.
Tompkins supports his claims with numerous documents including two designs he completed for space battle cruisers and space carriers that would decades later become the backbone of U.S. Navy Space Battle Groups.
Tompkins was given the job at the “Advanced Design” Douglas think tank, due to exceptional skills he exhibited in his war time service with Navy Intelligence from 1942-1945. Significantly, during his service at San Diego’s Naval Air Station, Tompkins directly participated in intelligence debriefings of Navy agents embedded within Nazi Germany’s most secret aerospace facilities during and immediately after World War II.
In his autobiography, Tompkins describes what the Navy spies had found:
The Navy agents (spies) in Germany discovered what all those “out of this world” aliens gave Hitler: UFOs, antigravity propulsion, beam weapons, extended life and plenty of mind-controlled willing girls programs. The reptilians made a deal with the Third Reich SS giving them this big box full of toys in exchange for letting Hitler enslave the rest of the planet. (pp. 70-71)
Over his four years with Navy Intelligence, Tompkins helped in the covert distribution of data from Nazi Germany’s two distinct secret space programs to Douglas Aircraft Company, along with other select aerospace companies and universities that had the scientific expertise to understand what the Nazis were doing.
When Tompkins joined Douglas Aircraft Company in 1950, it had already formed its Advanced Design think tank to design antigravity space craft. Once Tompkins moved over to Advanced Design in 1951, he was specifically tasked to design a variety of antigravity space vehicles, using his knowledge of Naval Intelligence gathered from Nazi Germany and his own talent for technical detailing.
Tompkins describes his two superiors at the Advanced Design Think Tank:
I reported directly to Dr [Wolfgang] Klemperer and Elmer Wheaton, the V.P. of engineering who wore two hats. He was V.P. of all the classified missile and space-systems programs. Unknown to 99.9%, Wheaton was V.P. of the above top secret compartmentalized extraterrestrial threats research Think Tank, too, sometimes referred to as Advanced Design. (p. 48)
Further, Tompkins relates the covert way in which the Navy went about making design requests to Advanced Design:
After receiving our unsolicited proposal for star ships [the Navy put out a sole source request for a proposal for exploratory star mission vehicles…]. Actually we didn’t even get an RFP (Request for Proposal); it was just slipped in under the floor door to our Advanced Design…. on the envelope it only said: “To Whom it may concern.” [p. 68]
Tompkins says that he approached his work by studying the mission parameters for the requested future space battle groups. He then was able to come up with designs that would allow the Navy to fulfill its future space missions.
Creating the configuration of a Naval Space Battle Group comprising kilometer-long vehicles from the mission parameters he had been given, Tompkins explains:
I redefined a standard Naval space battle group complement, stating that it would consist of one 2.5 kilometer spacecraft carrier, with a two-star on board as flag, three to four 1.4k heavy space cruisers, four to five 1k space destroyers, two 2k space landing assault ships for drop missions, two 2k space logistic support ships, and two 2k space personal transports. (p. 80)
Tompkins writes about two Navy star ship designs completed at the Douglas think tank, and includes the documents in his autobiography:
The figures following show two original drawings of Naval spacecraft carriers and battle cruisers that were visualized in Advanced Design, in 1954, from dozens of alternate configurations. Scale modes of these kilometer-long craft were subsequently made. (p. 67)
The first design is for the 1.4 km battle cruiser. 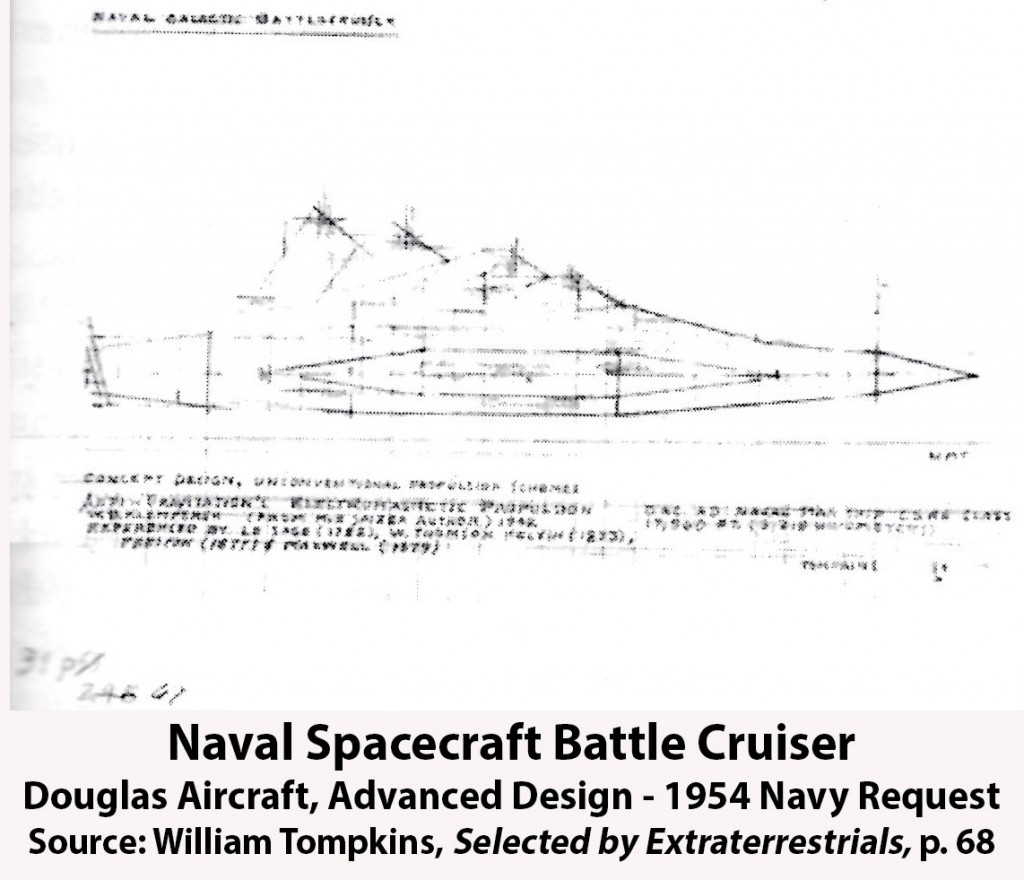 The second design is for the 2.5 km long spacecraft carrier. 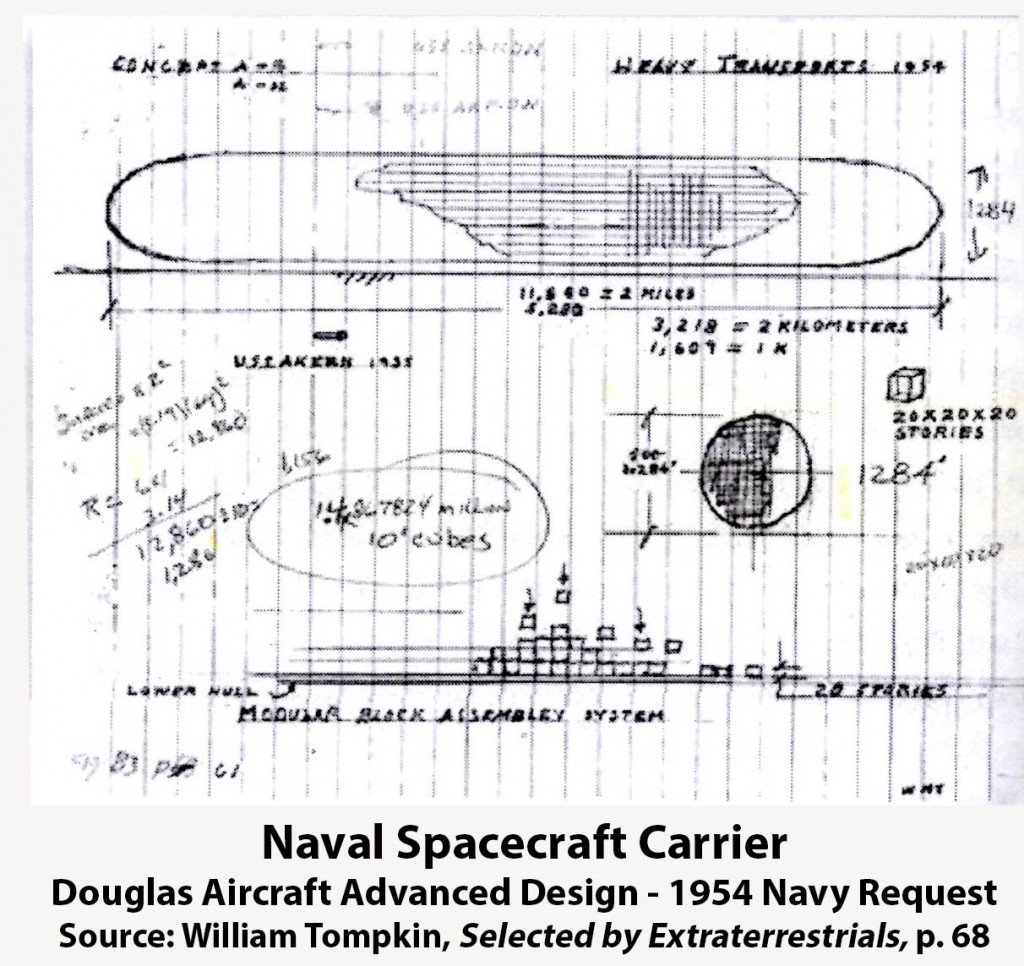 Tompkins later worked for TRC, General Dynamics and other aerospace companies that were working on different classified aspects of the space battle cruisers and carriers being secretly built by the U.S. Navy. More of this information will be released in future volumes of his autobiographical accounts.
After his initial designs of the space carriers were completed in the early 1960s, Tompkins claims that it took nearly a decade for detailed architectural plans to be developed, enabling official construction to begin. Consequently, building began in the 1970’s and the first operational space carriers were deployed in the 1980’s, under a highly classified space program called Solar Warden.
Tompkins’ claim corroborates the testimony of other secret space program whistleblowers who state that the Solar Warden Program became operational in the 1980’s under President Reagan.
Eventually, there were eight space carrier battle groups that were built for the U.S. Navy in the 1980’s and 1990’s, according to Tompkins.
How credible is Tompkins extraordinary testimony? 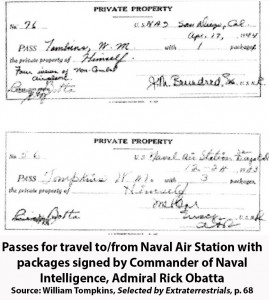 To support his claims, Tompkins includes several documents in his autobiography. These include copies of two separate passes he received to enter and leave the San Diego Naval Air Station with up to three packages. These packages contained the alleged secret data provided by the Navy agents that was being distributed by Tompkins to select corporations.
The passes were signed by the head of Naval Intelligence at the Naval Air Station, Admiral Rick Obatta. These documents provide hard evidence that Tompkins was indeed acting as a courier for Naval Intelligence during World War II, as he claimed.
As for what was in the packages that Tompkins was carrying, he has supplied a copy of his mission statement that provides an answer. 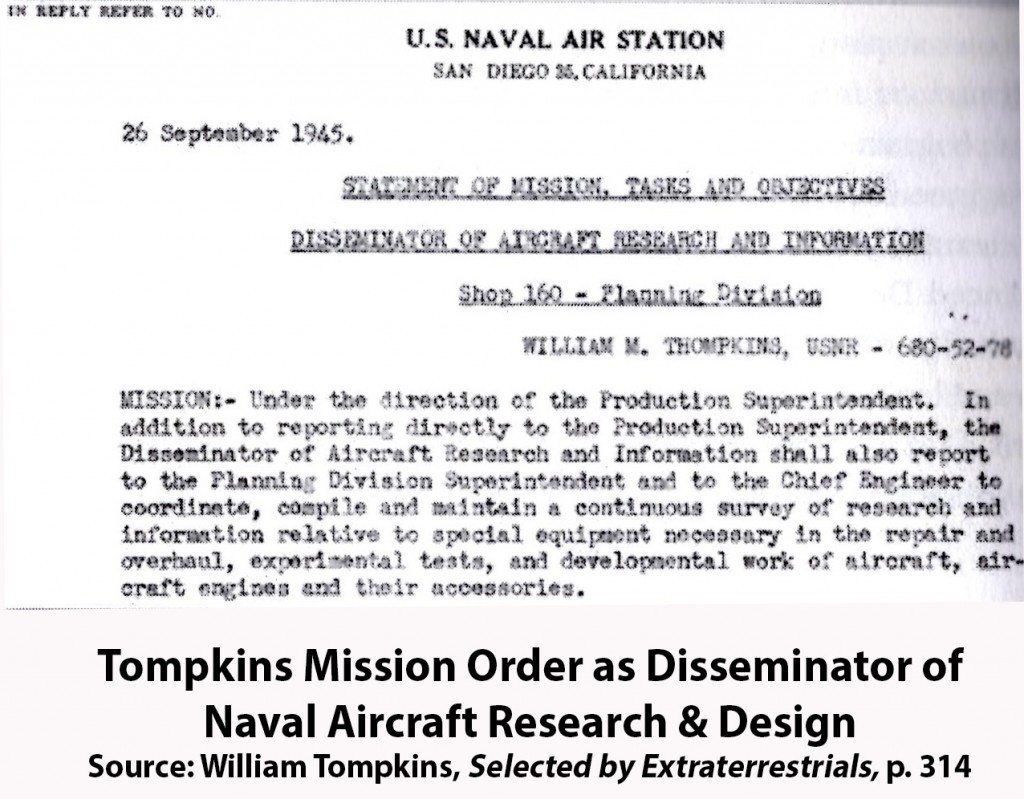 His mission orders confirm that he was authorized to work as a “Disseminator of Aircraft Research and Information.” This is compelling documentary evidence that the packages Tompkins was carrying contained classified Naval intelligence on advanced aircraft designs, which include those developed in Nazi Germany.
In addition to the documents presented in his book, there is further confirmation of Tompkins’ background in advanced aerospace programs. Tompkins employment, at Douglas Aircraft from 1950 to 1963, has been verified by another former Douglas Aircraft Company employee, Dr. Robert Wood.
Dr. Wood worked for 43 years at Douglas Aircraft (which later merged to form McDonnell Douglas), and was able to confirm Tompkins thorough knowledge of senior company officials such as Elmer Wheaton and Dr. Klemperer. Dr. Wood was so impressed with Tompkins detailed testimony that he decided to assist him by becoming the editor of his autobiography. 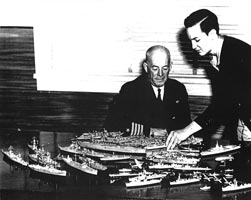 Finally, Tompkins phenomenal design abilities were publicly recognized by Navy officials back in 1941, who made statements to the national press about his highly detailed models of previously classified naval battle groups. This led to Tompkins being recruited into Navy Intelligence in 1942.
The documents that Tompkins has supplied in support of his testimony, confirm that he had the skills, background and employment history to have worked on large antigravity spacecraft that were secretly designed under contract to the U.S. Navy, while he was employed at Douglas Aviation from 1950 to 1963.
Tompkins testimony impressively corroborates the core claims made by Corey Goode and other independent whistleblowers about the secret space programs examined in the book, Insiders Reveal Secret Space Programs and Extraterrestrial Alliances (2015).
After the publication of Selected by Extraterrestrials in December 2015, Tompkins received a copy of Insiders Reveal Secret Space Programs from Dr. Robert Wood. In subsequent phone conversations, Tompkins stated that much of information that he read in Insiders Reveal Secret Space Programs, which is substantially based on disclosures made by Corey Goode, is accurate.
During Tompkins long career with U.S. Navy Intelligence and the aerospace industry, he compiled an impressive collection of documents that substantiate his testimony and background. Some of these can be found in his book, Selected by Extraterrestrials.
According to Tompkins, the U.S. Navy had corporate contractors design kilometer-long antigravity spacecraft in the 1950s to early 1960s, with construction beginning in the 1970s, leading to their deployment in the 1980s. His documentary support of these claims is substantive and compelling.
Tompkins testimony and documents provide powerful evidence that in the 1980’s and 1990’s, the U.S. Navy did indeed covertly deploy eight space carrier battle groups in a top secret space program called Solar Warden.
© Michael E. Salla, Ph.D. Copyright Notice