Trump Moves to Block Pelosi’s Overseas Trip Until After Shutdown

Logical thinking requires. SOTH Gov Plane cancelled re 45 KANSAS visits Egypt with message. Why would Pelosi rush to Egypt shortly after, despite being in a shutdown? FARA? We see you Nancy. You are not safe.Wasn’t supposed to be made public. Where else did she travel to that she ought not to? (NK?) Renegade traveled post 45 worldwide to re-assure negotiations against 45? Next in line? Nancy… please don’t emBARRass yourself. Re-open the Government. You lost. You tried. Nice try. NO DEALS @TS_SCI_MAJIC12 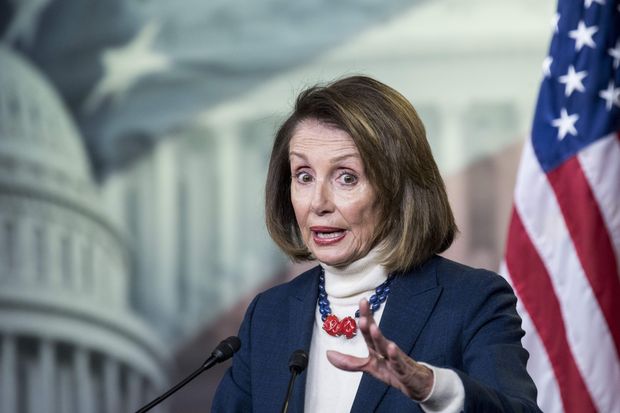 WASHINGTON—President Trump postponed use of a military plane for House Speaker Nancy Pelosi to travel to Afghanistan, a day after she urged the president to delay his State of the Union address, making personal the battle over the partial government shutdown that has lasted nearly four weeks.

The president issued a letter denying the aircraft as Mrs. Pelosi, along with a group of congressional committee chairmen and other lawmakers, were preparing to depart Thursday on the trip, according to a Democratic aide.

Several members of the delegation were already sitting in a bus outside the U.S. Capitol that would take them to Andrews Air Force Base when they received news of the postponement.

Even though the reopening of the government would require legislation passed in the House and Senate and signed by the president, the exchange of letters positioned the president and Mrs. Pelosi as the shutdown battle’s chief adversaries. Mr. Trump and Democrats are dug in over whether to pay for a border wall, which he has said is critical to national security and they have said is unnecessary.

Mr. Trump cited the shutdown as his reason for postponing the five-day trip, saying he wanted Mrs. Pelosi to stay in Washington to negotiate. Earlier Thursday, Mrs. Pelosi said she hadn’t been invited to the White House for negotiations since the president walked out of a meeting with congressional lawmakers last week.

Mrs. Pelosi, a day earlier, asked Mr. Trump to delay his State of the Union address to a joint session of Congress—or submit it in writing—because unfunded security agencies weren’t equipped to protect the event during the shutdown.

The Republican president has often attacked his political adversaries in blunt language, and Mrs. Pelosi has at times thrown her own barbs his way. Both their letters sought to cast the other as being self-centered and out of touch.

“In light of the 800,000 great American workers not receiving pay, I am sure you would agree that postponing this public relations event is totally appropriate,” Mr. Trump wrote. He added: “Obviously, if you would like to make your journey by flying commercial, that would certainly be your prerogative.”

A day earlier, Mrs. Pelosi wrote: “I suggest that we work together to determine another suitable date.”

The shutdown, the longest in history, has temporarily deprived 800,000 federal workers of paychecks, squeezed contractors dependent on government business and threatened to take the shine off an otherwise rosy economic picture.

This week’s tit-for-tat between Mr. Trump and Mrs. Pelosi suggests that any prospect of a rapprochement remains distant.

Sen. Lindsey Graham (R., S.C.), an ally of Mr. Trump’s, wrote on Twitter: “One sophomoric response does not deserve another.”

“I’m just shocked she would leave the country,” House Minority Leader Kevin McCarthy (R., Calif.) said of Mrs. Pelosi. “Why would you do that when the government is shut down?”

Drew Hammill, a spokesman for Mrs. Pelosi, said on Twitter that the speaker was traveling to Afghanistan to express appreciation to men and women in uniform there and get “critical national security & intelligence briefings from those on the front lines.”

The Defense Department isn’t required to provide the speaker military aircraft, but since the Sept. 11, 2001, attacks, the Pentagon has extended military travel as a courtesy. As commander-in-chief, Mr. Trump can opt to cancel military travel. The Pentagon is fully funded during the shutdown.

Mr. Trump and a Republican delegation have traveled to Iraq since the shutdown began.

Mr. Trump made the decision to postpone Mrs. Pelosi’s trip earlier Thursday, as soon as he heard she was going, a White House official said.

Mrs. Pelosi had submitted a request for Defense Department overseas travel that had been approved, a defense official said. U.S. officials’ travel to war zones isn’t broadcast ahead of time for security purposes.

The White House official, asked whether Mr. Trump had exposed Mrs. Pelosi to a security threat by announcing she was headed to Afghanistan, referred the question to Defense Department. The Pentagon referred questions to the White House.

Another White House official said the move wasn’t retaliation for Mrs. Pelosi’s efforts to postpone the State of the Union speech but rather because Mr. Trump wanted her to stay in Washington and negotiate.

Mr. Trump on Thursday began fundraising off the effort to postpone his address, sending supporters an email with the subject line: “I’m disinvited?”

White House officials said no decision has been made about when and where Mr. Trump will deliver the speech.

Some people close to the White House said Mr. Trump could deliver his speech in the GOP-controlled Senate.

Former White House chief strategist Steve Bannon suggested Mr. Trump give his speech on the southern border and use the forum to declare a national emergency, in which the president would seek to divert funds from elsewhere in the government to build a border wall without congressional approval.

Mr. Trump has canceled his own planned travel to Davos, Switzerland, for the World Economic Forum next week, but had planned to send a White House delegation including Treasury Secretary Steven Mnuchin in his place. The White House said later Thursday that the president had decided to cancel the delegation’s trip out of consideration for the employees sideline by the shutdown.

Advisers to Mr. Trump said they have grown more antsy about the shutdown in recent days as they see no sign that Mrs. Pelosi will budge.

“Every day the government isn’t open, [the president] is losing,” one person close to the president said. “He thought Pelosi was going to bend. Look, she’s not going to. She doesn’t have to.”

— Alex Leary
and Joshua Jamerson
contributed to this article.