Hi James just a small update for you. I have learnt today that Britain is doing what France and Germany have not dared. Britain putting all of its key industry eggs into one basket. BAE systems is merging with the Franco-German European Aeronautic, Defence & Space (EADS)

The deal will give away control over Britain’s most important defense contractor and make a new conglomerate the top arms seller in the World.

Without BAE Britain will have little left of an independent defence industry. Britain will be completely dependent on France and Germany for it defense. It would lose control of its most important aircraft manufacturer the builder of its main battle tank, next generation aircraft carriers and nuclear submarines, and as well as its suppler for many other weapons and electrical systems.

This of course is foolishness for Britain as Germany’s history of striking like a “bolt from the Blue.” Will be further brought about.

Who could have foreseen that Britain would hand over the company that helped save it from the Nazis. So the question is what has been given away regarding also the hidden industry’s under space command with its alliance with Britain. Or has this alliance also given all control to the same national powers at that level or is it about too. Interesting since the Nazis have been invited by space command to set up camp and share information. Although the alliance is run by a Nazis cabal it is worthy to note that in the end national interests will bring into mind old scores to be settled.

To combine this with a hateful alien and fallen entities combine working as one.

British defence giant BAE Systems is poised to fall into French and German hands in a £31billion deal.

In a late announcement yesterday, it was disclosed that talks between BAE and European Aeronautic, Defence & Space (EADS) are at an advanced stage.

BAE claimed the proposed deal would be a merger, but it would see its shareholders own 40 per cent of the combined group and EADS 60 per cent. 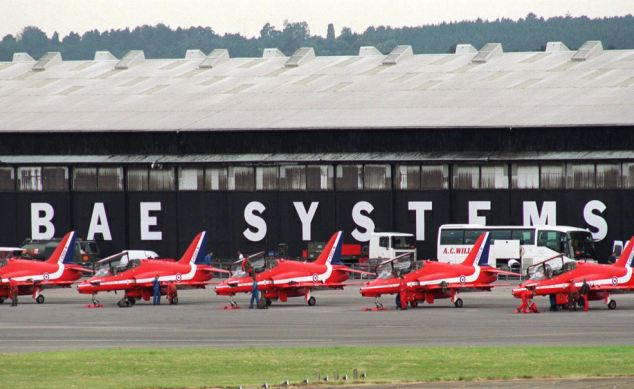 Takeover or merger? BAE is Britain’s biggest defence contractor and exporter and has been formed over decades by a series of mergers

A consortium of aerospace and defence manufacturers from France, Germany and Spain, EADS is headquartered in Paris and Berlin.

BAE is Britain’s biggest defence contractor and exporter and has been formed over decades by a series of mergers among the nation’s most revered defence names, such as Vickers, DeHavilland and Marconi.

The prospect of BAE becoming a minority partner in a European-wide defence venture is likely to alarm Tory Eurosceptics who may see the deal as placing Britain’s defence future in the hands of Paris and Berlin.