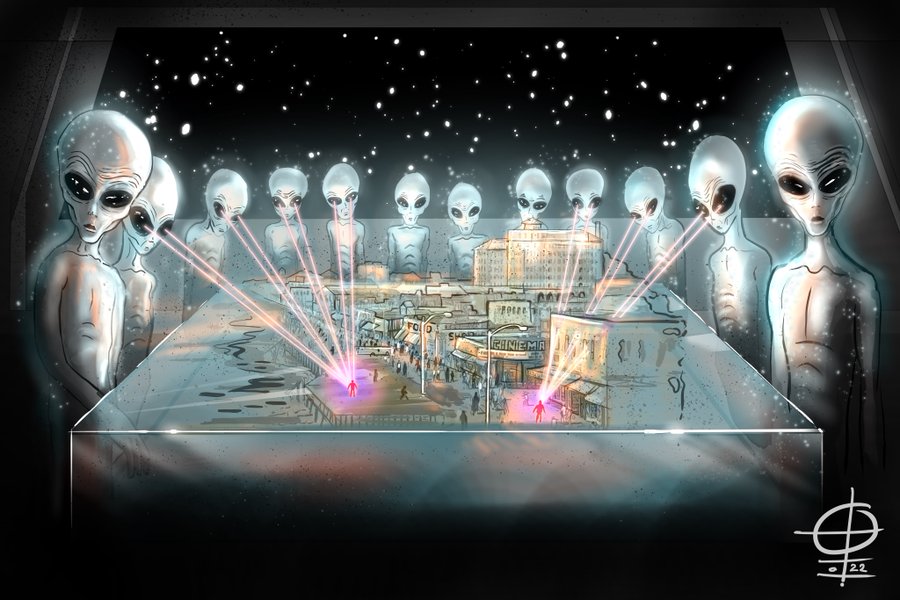 The ability for our consciousness to exist outside of our bodies while our bodies remain alive and well is a fascinating element to this reality we occupy that really does seem worth exploring.

Indeed we see this in many reports of encounters with other beings – there are plenty of cases where people are brought on board a craft and some form of procedure is performed where the experiencer’s consciousness is suddenly outside of their bodies – sometimes under guidance from these beings. Sometimes as reaction to something they are doing.

But people have explored doing this themselves. And indeed while in what one might call “the Astral form” it appears when someone gets a hang of it. They can project themselves using their conscious intent to almost any location. And so many Experiencers out there decided to pay various beings a visit. What stands out is unlike when visiting other humans – the beings can always tell the person is there. Stranger still is when visiting events from the past that have these beings present, they can still notice and see the astral projector.

So checking in on such entities without them knowing is seemingly impossible. Nevertheless, its a fine way to reach out and interact with these beings on our own terms. I find this idea fascinating and highly appealing.

The above image depicts what the Experiencer Tom Matte witnessed when encountering one of the species of Greys on one of their craft.

“This scene created by the multi-talented Olof Rockner
is from one of my first remote viewing encounters aboard an alien Grey spaceship. I didn’t see any technology on the ship. No flight controls or anything like that. Just this room with a raised glass table.

The rays represent the waves coming from the Greys eyes. They don’t have visible rays shooting from their eyes. It’s more like sound waves from our mouths or light waves from the sun. This is how they communicate with each other and influence us.
They don’t speak, everything is received as an image AND/OR they somehow know the exact synaptic connections in our brains that trigger the word and sound they want us to hear in our head.
I have no idea what they were trying to achieve with their remote viewing. After a very short time, two of them saw me and turned to look my way. I was a curiosity; they are not used to humans watching them. They were obviously not pleased that I was there.

This was one of the first of many remote viewing encounters with Greys. In fact, the only way I’ve ever encountered and communicated with Greys is with remote viewing. This is not about technology & it’s not Woo either. It’s about understanding their extraordinary communication abilities, their physiology, and what this non-human intelligence is capable of, especially when most people don’t even believe they’re here on Earth.

We should be studying them the same way they study us. “

Other Experiencers have been doing just that.

Peter Whitley (National Director for MUFON of Japan) Has managed to visit some Greys on their craft and quiz them multiple times.

This particular species explained to him via telepathy that unlike humans they are some form of manufactured entities “Biological robots” that “do not have souls” (Which could mean they are conscious but not a separate consciousness that occupies a biological body the way humans are.)

They explained their mission here is “assisting the development of human souls”. (Raise vibration? Raise the level of the collective human consciousness perhaps? )

Experienced them still using a form of screen memory or hologram to overlay the environment as a form of communication and less as deception, for example nurses in a nursery as an over lay for what really was Tall Greys in a sparse hybridization room. Which they showed him when he asked them to.

However they were not always forthcoming with their answers to his questions often in the pretext of him not being able to understand.

But they did seem very interested in trying to help him understand what they were doing.

He got the strong impressive from them that they appeared to have an extreme interest in the human ‘experience’ itself.

Peter even had conversations Mantis like beings. Who explained that they made the greys Peter had previously encountered. They showed him a cone like object that these beings explained created crystals that other technologies that allowed them to do what their species do. The object was not created by them. They found it. Eons ago.

Rick from Astral Club visited a species of Greys in the late 80’s.

He also got the impression that the ‘smaller Greys’ that he visited at least were artificial beings of some sort.

He found himself on craft in orbit of the Earth and was able to ask them questions though he is uncertain if he believes everything they told him but indeed they explained how they could not be seen by earth as they are “cloaked”.
He asked them about their home world – they explained that they lived in underground cities on their home world due to their sun heating up thousands of years ago. But on one visit they said the planet is located in the Pleiades system. Another time they said Sirius. (Perhaps they were not the same Greys – a common mistake as their are many species.)

They were very curious about this ability to Astral Project. They even asked him for his home coordinates (where his physical body was) but he decided to keep that to himself (much to their disappointment).

He got various answers to the “why don’t you announce yourselves to humanity” question. From complete bemusement at the question. To explaining that they have announced themselves to world leaders. Who asked them to not reveal themselves.
Another time he got that they have a star trek like prime directive system in place regarding open contact with species who are not at a certain level of development yet.

(Amusingly they seemed to be aware of the tv show Star Trek and he asked them if they actually watched Star Trek? They pretty much said no they just understand the concept of it from contact with other humans.)

I’ve hope to learn Astral Projection. It seems empowering for us as humans to have this ability.

Has anyone here tried to Astral Project? And if so, have you paid a visit to any of the beings up there?